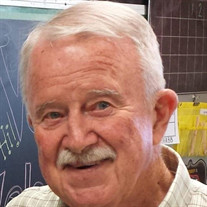 David Howard Wieland was born November 25, 1941 to Howard R. Wieland and Blanche I. (Brown) Wieland in Springfield, Missouri. He was their first-born child, later joined by his brother, Kenneth and his sister, Linda. Growing up, his family farmed near Elwood, Missouri and he attended a one-room school house there until fourth grade. The family then moved to Republic, Missouri area where they again farmed. His love for farm living and his development of a strong work ethic began in those years. Dave’s junior high years were spent in Springfield where he attended Reed Junior High. During this time, he helped his dad on his milk route. His family moved to Bolivar, Missouri where he attended tenth, eleventh and twelfth grade at Bolivar High School, graduating in 1959. While in high school, Dave was an assistant on a local bread route every morning before school. He was a groovy BHS drummer for the Stardusters and B-Bops. After high school graduation, Dave attended Drury College where he graduated with a bachelor of arts in political science and economics in 1963. He paid his way through college by delivering Holsum Bread in the Springfield area. About this time, the Vietnam Conflict was getting into full swing and Dave enlisted in the United States Air Force in the fall of 1963. He was inducted in January 1964 and completed Officers Training School at Lackland Air Force Base, San Antonio, Texas. As a navigator bombardier on a B-52 Stratofortress bomber, he served three six-month temporary TDY duties in 1967, 1968 and 1969. He successfully completed 153 missions during his tours of duty and was honorably discharged from the US Air Force in September of 1969. During David’s time at Drury, he met the love of his life, Toni Hickman. They were married on June 19, 1964 at James Connally Air Force Base in Waco, Texas. They had three children – Julie, Margie and Matthew. After his military service, Dave was a banker for Security Pacific Bank in Riverside, California where he made construction loans. He then went to work as the land acquisition officer for one of his clients, Lewis Homes, a construction and development company that built subdivisions and apartment complexes. In 1972, as the company expanded, the family moved north to Davis, California where Dave worked until 1984. He then was hired to lead the construction and development of a 7,000-acre development known as Stanford Ranch outside Sacramento, California. While living in California, Dave’s favorite adventures with his family included backpacking in the Sierras and trips to the mountains or beaches for long weekends with family and friends. He and Toni also enjoyed camping trips up the California coast. Dave and Toni returned to Missouri in 1993 to care for parents, aunts, uncles and others in need. They bought a farm north of Seymour, Missouri where they rented their pastures to their Amish neighbors. Dave enjoyed his Amish family and was their driver whenever able. He loved living on Lick Skillet Farm and being involved with his church family at Seymour United Methodist Church and the Seymour community. Dave was a wordsmith and often had a nickname for anything and anyone. In Missouri, Dave was at his best as grandpa to Maggie, Tommy, Katie, Emily and Joe. On April 3 of this year, he and Toni were thrilled to become great-grandparent to Hunter Thomas Moore. Dave returned to the Lord on Monday, July 12. He was preceded in death by his parents, Howard and Blanche Wieland; infant sister, Patricia Ann; mother-in-law, Bellina Hickman; several aunts, uncles and cousins. Dave is survived by his wife of 57 years, Toni; daughters Julie (Ken) Bolls and Margie (Joel) Stewart; son Matthew (fiancé Shirleen) and former daughter-in-law Nicole, mother of grandson, Joe; grandchildren Maggie Moore (Sam), Tom Bolls, Katie Bolls, Emily Bolls, Joe Wieland; great-grandson Hunter Moore; sister Linda (Dan) Bunch and brother Kenny (Beverly) Wieland. Services for David Wieland, 79, Springfield formerly of Seymour, will be at 3:00 p.m. Thursday, July 15, 2021 in Holman-Howe Funeral Home, Seymour. Visitation will be Thursday from 2:00 p.m. until service time in the funeral home. Graveside services with military honors will be Friday, July 16, 2021 at 11:00 a.m. at Maple Park Cemetery in Springfield, Missouri.

David Howard Wieland was born November 25, 1941 to Howard R. Wieland and Blanche I. (Brown) Wieland in Springfield, Missouri. He was their first-born child, later joined by his brother, Kenneth and his sister, Linda. Growing up, his family... View Obituary & Service Information

The family of David H. Wieland (Seymour) created this Life Tributes page to make it easy to share your memories.