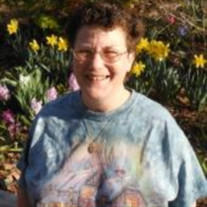 Debra “Debbie” Jean McKinney, daughter of the late Harold & Carolyn (Duvall) Niehaus, was born on July 29, 1959, and departed this life on April 1, 2022. At the time of her death, she was sixty-two years, eight months and three days of age. Debbie was preceded in death by her parents, and her sister, Sheryl Niehaus. She is survived by her loving husband, David McKinney; her sister, Donna and husband Sean McGowan; and three nieces, Ryn McGowan, Jennifer McGowan and Mary McGowan. Debbie was born in Garland, Texas but at an early age her family moved to Camdenton, Missouri where she was raised and would later graduate from Camdenton High School. Following her high school graduation, she enrolled at Central Missouri State University, where she would later obtain her BA degree in English. After college, she moved to Kansas City where she worked for an insurance company. Debbie would later return to Camdenton following her father’s death in 1995. After returning home, Debbie worked a few jobs mainly at Yankee Peddler Tea Room and Wal-Mart, where she retired, or as she put it “Unlabored on Labor Day.” After few brief meetings at the blood donation clinic and being set up on a blind date she was united in marriage to the love of her life, David McKinney, on December 15, 2010 at a private ceremony before having a larger wedding with family and friends March 13, 2011. Debbie made a profession of faith and was a longtime member of Rock House Church in Linn Creek, Missouri. In her spare time, she was active in the Conservative & Pro-Life Movements, and she truly loved being able to get out and meet new people. Debbie, or “Grizzie” as her nieces affectionately called her, will be truly missed by all who knew her. Together, we celebrate her life and her accomplishments and will treasure the memories she created for her family and friends. Funeral services will be held at 6:00 p.m., Wednesday, April 6, 2022, at Allee-Holman-Howe Funeral Home. Visitation will be from 4:00-6:00 p.m. in the funeral home, prior to the service. There will be a second visitation/service at Becker Funeral Home in Mt Olive, Illinois Friday, April 8, 2022, held from 9:00-11:00 a.m. with services following. She will be buried with her sister and parents at the Mt. Olive Cemetery. To send flowers to the family or plant a tree in memory of Debbie, please visit our floral store.

The family of Debra J. McKinney (Camdenton) created this Life Tributes page to make it easy to share your memories.