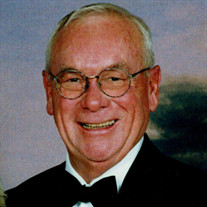 Dr. Dennis Eugene Hite was born March 30, 1939, to Clarence Eugene and Velma Mae Garrett Hite. He was received into his heavenly home on Saturday, August 21, 2021, with Deanna by his side, in his earthly home, in Lebanon, Missouri, at the age of eighty-two years, four months, and twenty-one days. On June 22, 1962, he was united in marriage to Deanna Marie Miller, and they shared fifty-nine years of happiness and memories. This union was blessed with a son, Steve, and a daughter, Holly. His parents and his brother, Dale Garrett Hite, preceded him in death. Dennis is survived by his loving wife, Deanna, of the home; a son, Steve Hite, and his wife, Jennifer, of Lebanon, Missouri; a daughter, Dr. Holly Bondurant, and her husband, Dr. Charles Bondurant V, of Columbia, Missouri; four grandchildren, Garrett and Haley Hite, of Lebanon, Missouri, and Ruth and Charles Bondurant VI, of Columbia, Missouri; a brother, Mike Hite, and his wife, Jo, of Colorado Springs, Colorado; a sister-in-law, Jeanette Whipple, of Lebanon, Missouri; four nieces and one nephew; as well as a host of other relatives and many friends. Born in Olathe, Kansas and later moving from California, Dennis set up permanent roots in the Lebanon area at the age of five. He attended Lebanon R-III Schools and graduated from Lebanon High School in the Class of 1957. Dennis was an exceptional student, and after working for a local veterinarian, Dr. Joe Hughes, decided to go into the field of medicine after graduation. He completed his undergraduate and medical school education in seven years at the University of Missouri. While at MU, he was a member of the Phi Eta Sigma Scholastic Achievement Fraternity. During his surgical fellowship, Dennis published his research project “Archives of Surgery, Vol. 87, No. 6” in the American Medical Association Journal of Surgery in December of 1963. After graduating in 1964, Dennis served two years of residency in Tulsa, Oklahoma. Dr. Hite began practicing medicine with Drs. Tom Beene and Jim Porter in the historic Joe Knight Building in downtown Lebanon in 1966, and soon joined several other local doctors in the Harwood Clinic. He continued there for almost twenty-five years before moving to the new Mercy Hospital in the Mercy Family Medicine Clinic, where he practiced until 2020. Through his many years of service, Dennis saw numerous changes in medicine. When he began, he was whatever kind of doctor the situation needed. He delivered babies, performed surgery, set broken bones, and cared for patients in need. As time drew on, Dennis practiced medicine in a more preventative nature, but still maintained the same level of care and compassion. He loved his patients and cared for many generations of families. Dr. Hite was awarded a Conspicuous Service Medal by Gov. Warren Hearnes while serving on inactive duty training at Weldon Springs, Missouri, with the 1st Battalion, 138th Infantry in 1968. Dennis arrived upon a military vehicle accident and tended to five injured men, taking charge of their care and following them to the hospital where he briefed the staff on their conditions and helped arrange further care. Dennis was also named a diplomat of the American Board of Family Practice for showing competency in the field of comprehensive, continuing care of family through years of service and by passing certification examinations. Dr. Hite had served with Laclede County Project Misdemeanant for a number of years, and received the Liberty Bell Award from the Missouri Bar Association for his work in the area of child abuse and neglect. He had served on countless forums, given numerous speeches and worked with many national organizations such as the Heart Fund and American Cancer Society. He was instrumental in bringing the Y.M.C.A. to Lebanon and served as the first Chairman of the Board. In February of 2006, Dr. Hite was honored by being the namesake of the Dr. Dennis E. Hite Honorary Society, which was originally part of the Mercy Heritage Foundation physicians giving platform. In 2014 Dr. Hite was inducted into the Lebanon Community Achievement Wall of Honor, an award given to individuals that helped shape Laclede County into what it is today. Dennis was a long time active member of the First Baptist Church in Lebanon, Missouri. Dennis served on numerous committees and boards within the Lebanon community and Laclede County, and offered support and guidance throughout the years. He earned the respect and admiration of many throughout his years of service and had a lasting impact on every life he touched. Of all the titles and honors Dennis had received over the years, his favorite one was Papa. He loved his family deeply and was proud of everything his children and grandchildren have accomplished. Dennis considered his family to be his most significant legacy. Visitation for Dennis Hite will be held Friday, August 27, 2021 from 5:00 - 7:00 PM at the Holman Howe Funeral Home in Lebanon, Missouri. Funeral Services for Dennis Hite will be held Saturday, August 28, 2021 at 10:00 AM at the First Baptist Church in Lebanon, Missouri. Graveside services will be held privately for the family. Contributions in honor of Dennis can be made to the Mercy Health Foundation or Ethnos 360 (formerly New Tribes). The Hite family thank friends and family in advance for their willingness to attend both the funeral service and visitation while wearing a mask.

Dr. Dennis Eugene Hite was born March 30, 1939, to Clarence Eugene and Velma Mae Garrett Hite. He was received into his heavenly home on Saturday, August 21, 2021, with Deanna by his side, in his earthly home, in Lebanon, Missouri, at the... View Obituary & Service Information

The family of Dr. Dennis Eugene Hite (Lebanon) created this Life Tributes page to make it easy to share your memories.