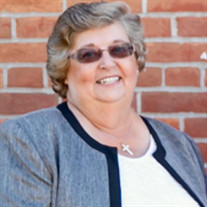 Diana Lynn (Mitchell) Redies, passed on from this world to the Lord’s eternal life on June 9, 2022. She considered the following to be the highlights of her life. On a hot July 9th in 1954 Diana came into this world, born to Loren Mitchell. She was raised in the loving home of her grandparents Edrie and Raleigh Mitchell in Preston, Missouri. On May 10, 1964, Diana accepted the Lord Jesus Christ as her Savior, grew in faith, and tried to walk in His service. On July 29, 1972, Diana married her high school sweetheart, Ricky Redies. Diana and Ricky shared their lives together on their farm north of Urbana, Missouri. On December 12, 1975, their son, Christopher Mitchell was born. Christopher added love and joy to their lives. Diana remained proud of her son, whom the Lord blessed. On August 18, 1980, Diana began her career as a social science teacher at Skyline High School. She believed the Lord was the one to receive the credit for any goodness which came from her work. Mrs. Redies cared about the students, their development of self-esteem, their ability to think for themselves, and desired to make a difference in their lives. On May 28, 1995, Diana’s first grandchild, Christon Alexis (Lexie), was born. This granddaughter brought pleasure and fun to Diana’s life. Diana’s greatest hope for Lexie is to be happy, knowing she is loved by her grandparents and the Lord. In May 2003, Mrs. Redies ended her teaching career to continue in full-time family life with Ricky, Christopher, and Lex. On September 3, 2016, a daughter-in-law, Kelly Ann, was added to the family. On June 4, 2020, a grandson, Jude Mitchell was born into this world as the second grandchild of Diana and Ricky. During her life, Diana enjoyed the farm, her friends, and teaching. Diana was a graduate of Skyline High School and received undergraduate and graduate degrees from Southwest Baptist University. After returning to Skyline to teach, Diana, also as known as Mrs. Redies, D.R., or Mom, was well thought of by her peers, and, more importantly to her, the students. She cared deeply for them and had their respect. This care and respect was reciprocated as the students voted her “favorite teacher” for 23 years. During her years at Skyline, it was never difficult to locate Diana. Her unique style of teaching, distinguishable voice, and laugh could be heard throughout the hallways. Diana was also named multiple times in the Who’s Who Among America’s Teachers publication. A testament to Diana’s faith in Christ, and a memory which resonates with her son, was the Christian Bible kept on her desk at school. One day an administrator came to Mrs. Redies’ classroom and told her to remove the Bible to which Diana responded that he may consider the Bible a religious book or a historical book but either way it was staying on her desk. That Bible remained on her desk until she retired from teaching. Diana served as Skyline Fellowship of Christian Athletes (FCA) sponsor. She was also involved with the youth in the church in a variety of ways and served as Vacation Bible School coordinator. Most important to Diana were the people in her life: her family and friends, and by them she will be greatly missed. Diana was preceded in death by Edrie and Raleigh Mitchell, Loren Mitchell; and is survived by her husband Ricky, son Christopher and his wife Kelly, granddaughter, Christon Alexis, and grandson Jude Mitchell. Visitation for Diana will be 5:30 p.m. to 7:30 p.m. on Monday, June 13, 2022, at the Cantlon-Otterness & Viets Funeral Home in Urbana, Missouri. Funeral services will be Tuesday, June 14, 2022, at 10:00 a.m. at the funeral home. Interment will be held at Fisher Cemetery in Preston, Missouri following the service. Officiating the service will be Pastor John Noble, and escorts will be Kevin Nelson, Emil Edwards, Ethan Edwards, Jason Eidson, Travis Bybee, and Donnie Morehead. In lieu of flowers memorial contributions can be made to the ALS Association or Compassus Hospice. Donations can be made through the funeral home. To send flowers or a memorial gift to the family of Diana Lynn Redies please visit our Sympathy Store.

Diana Lynn (Mitchell) Redies, passed on from this world to the Lord&#8217;s eternal life on June 9, 2022. She considered the following to be the highlights of her life. On a hot July 9th in 1954 Diana came into this world, born to Loren Mitchell.... View Obituary & Service Information

The family of Diana Lynn Redies (Urbana) created this Life Tributes page to make it easy to share your memories.

Diana Lynn (Mitchell) Redies, passed on from this world to the...