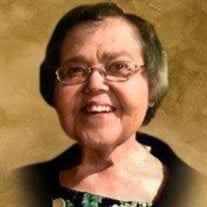 Dixie Ann Jenkins, 79, went home to be with the Lord on Tuesday, May 4, 2021 at Citizens Memorial Health Care Facility in Bolivar, MO. She was born January 22, 1942 in Springfield, MO at Burge Hospital to William H (Bill) Hines and Hazel Marie Holliday Hines. She has one younger sister, Sharon Kay Hines Long. Dixie always loved her name, as she was named after both of her grandmothers, Eula Dixie King Holliday and Clara Ann Allen Hines. She graduated from Bolivar High School in 1960. On December 30, 1960, she was united in marriage to Robert (Lucky) Jenkins and to this union one daughter, Robin Ann, was born. For the most part, Dixie was a homemaker and stay at home mom. She also was a bookkeeper for several businesses in Bolivar including the First Assembly of God Church for 16 years. She served the Lord by working in Sunday school, VBS and WM’s. She loved to encourage and brighten the lives of family and friends by sending cards. She liked to scrapbook, knit, crochet, and read. She completed many knitting projects for Madison Angels, the Violence Center, Mt Gilead, Fairview and CMH, which included many pairs of house shoes and prayer cloths. Dixie was saved in 1964. She was a member at the First Assembly but was attending Mount Gilead United Methodist Church at her death where her grandfather, Rev. W. M. Hines, had been a pastor in the 1930’s and 40’s. She was preceded in death by her parents and grandparents. Survivors include her husband, Lucky, of the home; a daughter, Robin of Bolivar; a sister and brother-in-law, Kay and Charlie Long of Bolivar; her two godchildren, niece Sharon Long Muir (Rob) of Kansas City and nephew Paul Long (Brenda) of Bolivar; several brothers-in-law and sisters-in-law, nephews, and nieces. Funeral Graveside Service for Dixie Jenkins will be at 2PM at Mount Gilead Cemetery in Bolivar on May 7, 2021. Through Dixie’s generous giving heart, she requested that in lieu of flowers, memorial contributions may be made to Community Outreach Ministries (COM) food pantry of Bolivar or CMH Hospice. To send flowers or a memorial gift to the family of Dixie Ann Jenkins please visit our Sympathy Store.

Dixie Ann Jenkins, 79, went home to be with the Lord on Tuesday, May 4, 2021 at Citizens Memorial Health Care Facility in Bolivar, MO. She was born January 22, 1942 in Springfield, MO at Burge Hospital to William H (Bill) Hines and Hazel Marie... View Obituary & Service Information

The family of Dixie Ann Jenkins (Bolivar) created this Life Tributes page to make it easy to share your memories.

Dixie Ann Jenkins, 79, went home to be with the Lord on Tuesday,...