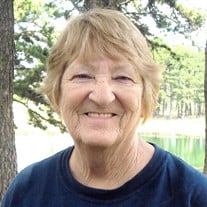 Dollie Mae Banks, daughter of Clint and Edith Skinner Devore, was born February 5, 1943, in Sleeper, Missouri. She departed this life Saturday, November 27, 2021, in her home, in Lebanon, Missouri, at the age of seventy-eight years, nine months, and twenty-two days. She was preceded in death by her parents; two grandsons, Austin and Derek Williams; five brothers, James, Everett, George, William, and Earl Devore; and three sisters, Ruby Geiger, Lola Faye Pollerize, and Bonnie Blackburn. Dollie is survived by three daughters, Jeanie Smallwood, Karen Davis, and her husband, Jay, of Lebanon, Missouri, and Debbie Phillips, and her husband, Buck, of Crocker, Missouri; two sons, Jr. Wood, and his wife, Sherri, of Phillipsburg, Missouri, and Roger Wood, and his wife, Cathi, of Lebanon, Missouri; thirteen grandchildren, Timothy Williams, Christopher Williams, and his wife, Justine, Michael Williams, Treva Summerfield, Lacinda Williams, Dustin Coppage, Eric Byler, and his wife, Wendy, Ricky Smallwood, Jr. and his wife, Miranda, Christina Smallwood, Skylar Wood, Amanda Rogers, and her husband, Todd, Lori Phillips, and Dakota Phillips; twenty-nine great-grandchildren; three sisters, Burley Isaac of Lebanon, Missouri, Velma Knapp of Lebanon, Missouri, and Joyce Blackburn of Lebanon, Missouri; and one brother, Charles Devore of the state of Colorado; a number of nieces and nephews; as well as a host of other relatives and friends. She was born and raised in the Sleeper community and earned her education there. She was a devoted homemaker to her family and also helped her husband in his construction business. She later worked as a custodian in area schools. Dollie was raised in the Pentecostal faith and followed that belief throughout her life. She always kept up with her church and her family. In her spare time she enjoyed bowling, listening to music, and playing Bingo. She loved her family dearly and especially liked having time with her grandchildren and great-grandchildren. Dollie was a loving mother, grandmother, great-grandmother, aunt, and was a caring friend. We celebrate her life and know that her family and friends will hold tight to the wonderful memories she made for them during her lifetime.

Dollie Mae Banks, daughter of Clint and Edith Skinner Devore, was born February 5, 1943, in Sleeper, Missouri. She departed this life Saturday, November 27, 2021, in her home, in Lebanon, Missouri, at the age of seventy-eight years, nine months,... View Obituary & Service Information

The family of Dollie M. Banks(Lebanon) created this Life Tributes page to make it easy to share your memories.

Send flowers to the Banks(Lebanon) family.