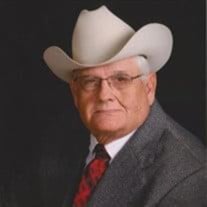 Donald Dean Daves was born on October 21, 1938, in Clayton, New Mexico. He departed this life on July 19, 2021. He was the son of Elmer and Roxie (Faircloth) Daves. Donald married Glenna Owns on July 3, 1958, in Clayton, New Mexico. He had the honor of being the youngest elected sheriff at age 21. He went on to work at Phillips Petroleum in Kansas and Texas. After retiring, Donald and Glenna moved to Buffalo, Missouri to farm and raise cattle. He enjoyed this very much. Donald was preceded in death by his wife Glenna; his parents; two brothers, Wayne and Tracy; and a sister, Bonnie Casey. He is survived by his daughter, Debra and husband Tom French of Durant, Oklahoma; his son, Bryan and wife Sheila Daves of Buffalo, Missouri; four grandchildren, Shadley Gonzalez and husband Jarrad of Stinnet, Texas, Kaden French and wife Leaugeay of Durant, Oklahoma, Stephanie Bailey and husband Spencer of Conway, Missouri, and Sharon Daves; five great-grandchildren Kyah, Sage, London, Ryken, and Sutton; one sister, Betty Waters; and one brother, Dale Daves. Donald will be missed by many friends and family. Visitation will be on Thursday July 22, from 6:00 p.m.-8:00 p.m. at the Cantlon-Otterness & Viets Funeral Home in Buffalo, Missouri. Services will be held on July 23, at 10:00 a.m. at the First Christian Church of Buffalo, officiated by pastor Tim Case. Interment will be held in Church Grove Cemetery in Foose, Missouri. In lieu of flowers the family requests donations to First Christian Church of Buffalo, Missouri. To send flowers or a memorial gift to the family of Donald Dean Daves please visit our Sympathy Store.

The family of Donald Dean Daves (Buffalo) created this Life Tributes page to make it easy to share your memories.