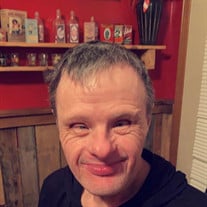 Donald Dwayne Rector, Jr., son of Donald Glen Rector, Sr. and Georgia Ann Long Rector, was born August 1, 1968, in Springfield, Missouri. He departed this life Wednesday, March 23, 2022, in Mercy Hospital, in Lebanon, Missouri, at the age of fifty-three years, seven months, and twenty-two days. His mother preceded him in death. Bubby, as he was lovingly called by his family and friends, is survived by his father, Donald Rector, of the State of Florida; a sister, Ashley Rector, and her spouse, Jennifer Carruth, of Lebanon, Missouri; a number of nieces and nephews, including Jessica Baker; and many other relatives and friends. He was raised in Lebanon, Missouri, and graduated from Lebanon High School. He was a faithful and devoted "Momma's Boy". He had worked at shredding paper for a time. Donald had attended Unity Freewill Baptist Church and later Garfield Avenue Church of God. His favorite activity was watching Scooby Doo and Hulk Hogan wrestling. Anyone who knew Bubby knew that he had a heart of gold, a crazy love for Scooby Doo and faith in God like no other. Bubby loved hard with anyone and everyone he had ever met. He was the most selfless person and always felt the need to care for anyone over himself. Bubby lit up any room he ever walked into with the brightest blue eyes and heart wrenching smile. He lived for fifty-three beautiful years much longer than anyone ever could have expected and he truly made an impact on anyone he ever met. I will forever cherish all of the beautiful life lessons he taught me without even knowing. Today he joined his mother, Georgia, in Heaven and we wish we could've gotten to see that beautiful reunion, we know it lit Heaven up.

The family of Donald Dwayne Rector, Jr. (Lebanon) created this Life Tributes page to make it easy to share your memories.