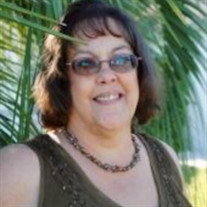 Dorice “Dori” Kay Clark, daughter of the late William and Delores (Standbridge) Cretton, was born on July 2, 1961 and departed this life on April 30, 2021. At the time of her passing she was fifty-nine years, nine months and twenty-eight days of age. Dori was preceded in passing by her parents; two brothers, Billy Cretton and John Cretton; and one nephew, Duke Cretton Jr. She is survived by her son, Ricky Clark Jr.; two siblings, Louise Battinus and Duke and wife Susan Cretton; her life partner, Dennis Hollandsworth; three grandchildren; many nieces, nephews and great-nieces and great-nephews; and her beloved pets, Princess, Aaron and Buddy. She also leaves behind several friends and other family members who will all truly miss her. Dori was born in Evanston, Illinois but an early age the family moved to the Lake of the Ozarks where she was raised and later graduated from Camdenton High School. A short time after graduation she was united in marriage to Ricky Clark, Sr. and to this union one son was born, Ricky Clark, Jr. After their divorce, she moved to Texas and worked as an on-site manager for a construction company on the Texas border for 20 years. She then moved to Florida where she spent a few years with her sister, Louise and became very close with Buddy, a Blue Amazon Parrot. Dori and Buddy had formed such a bond together that when she moved back home to the Lake of the Ozarks, she was able to bring him home with her. While back home she re-kindled her high school flame with Dennis Hollandsworth and together they cared and loved one another for the last several years. Dori was an avid reader; she loved to spend her time reading mystery and suspense novels. She had a very caring heart towards both people and animals. Dennis had a few acres of land where he would raise goats and each and every one of them became a pet to Dori. She even had one goat, Casey that she bottled fed because the mother had abandoned her. A Graveside Memorial service will take place at 10:00 a.m., Wednesday, May 5, 2021 at Allee-Memorial Gardens. Services are under the direction of Allee-Holman-Howe Funeral Home. To send flowers to the family or plant a tree in memory of Dorice "Dori" Clark please visit our Tribute Store.

Dorice &#8220;Dori&#8221; Kay Clark, daughter of the late William and Delores (Standbridge) Cretton, was born on July 2, 1961 and departed this life on April 30, 2021. At the time of her passing she was fifty-nine years, nine months and twenty-eight... View Obituary & Service Information

The family of Dorice "Dori" Clark (Camdenton) created this Life Tributes page to make it easy to share your memories.