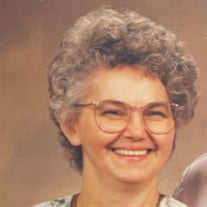 Dorothy Farrell Goss, was born September 15, 1934, in the Falcon, Missouri area, and departed this life Wednesday, June 9, 2021, in Lebanon South Nursing and Rehabilitation Center, in Lebanon, Missouri, at the age of eighty-six years, eight months, and twenty-five days. On December 2, 1961, she was united in marriage to Robert “Bob” Goss, who passed away on June 19, 2001, after sharing thirty-nine years of love and memories. She was preceded in death by her parents; and a half-sister, Norma Setliff. Dorothy is survived by a daughter, Lisa Morrison, and her husband, Tim, of Lebanon, Missouri; a son, Scott Goss, of Buffalo, Missouri; seven grandchildren, Whitney, and her husband, Sam, Timothy Ryan, Timothy Joseph, Britney, Nikki, China, and Bessie; ten great-grandchildren, Conner, Isaac, Rylee, Braydin, Gabriella, Angie, Cali, Dakato, Josah, and Noah; as well as a host of other relatives and friends. She was raised in the Falcon, Missouri area, and then lived in Springfield for several years. She eventually made her home in Lebanon where she and Bob lived for many years. Dorothy was a devoted homemaker to her husband and family and also worked at Anthony’s Department Store in downtown Lebanon from 1980 until 1989. She then worked at the Walmart Pharmacy and then Bonworth Clothing in the outlet mall. Later, she quit working to care for her grandbabies and was also an Avon representative for a time. In her spare time she enjoyed gardening and growing beautiful flowers. She also liked going to garage sales, doing crossword puzzles, and served as a Den Mother for the Boy Scout Troop # 59. Her life revolved around her family, and she enjoyed attending the sporting events and band competitions of her grandchildren and great-grandchildren. Dorothy was a loving mother, grandmother, great-grandmother, and was a caring friend. We celebrate her life and know that her family and friends will cherish the wonderful memories she created for them during lifetime. Services for Dorothy Goss will be Saturday, June 12 at 2 p.m. at Holman-Howe Funeral Home with Rev. Allen Reeves officiating. Visitation will be one hour prior to the service. Burial will be in Lebanon Cemetery. A memorial to Regional Hospice has been established.

The family of Dorothy F. Goss (Lebanon) created this Life Tributes page to make it easy to share your memories.