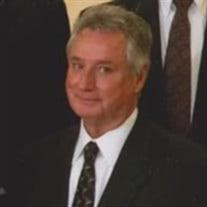 Doyle Wayne Nimmo was a dedicated community member, a generous people person, and devoted most of all to his family. He left this world a better place on November 11, 2021 at 77 years, 4 months, and 17 days of age. Doyle was born to John C. Nimmo and Claudine Richerson Nimmo on June 25, 1944 in Charity, Missouri. After Claudine passed away when Doyle was 4 years old, John remarried Mamie Canon Nimmo. Together they raised Doyle into the kind, giving man he became. After attending grade school in Charity, Missouri, Doyle completed his high school education in Buffalo, Missouri where he enjoyed playing baseball and basketball. After graduation, he attended Southwest Baptist University for 2 years. He joined his father in the family business in 1962. He served in the Army Reserves from 1965 to 1971. In 1970, he was given the honor to own and operate the family business until his time of death. That honor has now been passed down to his daughter, Devona. In 1966 Doyle united with Patsy Rogers and her two children, Angelia and Brad. Through this union, they were blessed with one daughter, Devona. In 1988 Doyle married the love of his life, Carol Webb who brought to the union four children, Dawn, Bruce, Kay, and Michael. During this union, Doyle and Carol played a large role in helping raise their granddaughter, Kendra. Doyle was a people person who was revered by all who met him; he was given the honor to serve on many insurance boards and a handful of various boards throughout the community. Although a respected professional, Doyle’s real pleasure was in spending time with loved ones. Doyle and Carol owned a lake house at Lake of the Ozarks from 1994 to 2017 where they welcomed many friends and family members to join them. Doyle enjoyed teaching many people to water ski, coaching softball teams, and getting everyone together for family gatherings, especially around the holidays. He was a devoted Kansas City Chiefs fan, a John Deere enthusiast, and a black angus cattle farmer. Doyle was preceded in death by his parents; three sisters, Phyllis Sharp, Marjorie Powell, Helen Armstrong; and one grandson, James P. Hawkins III. He is survived by his wife Carol; his children, Brad Hawkins, Angelia Owens and husband Mike, Dawn Webb and friend Terri, Devona Allen and husband Jeff, Bruce Webb & wife Shaynan, Kay Webb, and Michael Webb and wife Jaymi; 10 grandchildren, Brooke Wolfe, Casey Cox, Sammie McCracken, Justin Webb, Loryn Barclay, Kendra Lynch, Brooklyn Webb, Jerika Vanderford, Mikale Williams, and Cooper Webb; six great-grandchildren with two on the way; siblings, John C. (Junior) Nimmo, Jr., Polly Lillegard, Charles (Chuck) Nimmo and William (Bill) Nimmo; loyal life-time employee and friend, Glenda Crawford; along with a whole community of family members and friends who will miss him dearly. Funeral services will be held at 1:00 pm on Tuesday, November 16, 2021 at Cantlon Otterness & Viets Funeral Home in Buffalo, MO with Dr. Doug Earls officiating. Pallbearers will be Brad Hawkins, Michael Webb, Bruce Webb, Jeff Allen, Mike Owens, and Tommy Lynch. Honorary pallbearers will be Bill Monday, Charles Johnson, Mick Davies, Bob Cummings, Gary Naylor, Homer Williams, and Mike Murphy. Interment will be in the McGee Chapel Cemetery in Elkland, MO under the care and direction of the Cantlon-Otterness & Viets Funeral Home of Buffalo. Visitation will be from 11 a.m. to 1 p.m. prior to the service. In lieu of flowers, memorials may be made to McGee Chapel Cemetery. In lieu of flowers, the family requests donations be made to the McGee Chapel Cemetery. To send flowers or a memorial gift to the family of Doyle Wayne Nimmo please visit our Sympathy Store.

Doyle Wayne Nimmo was a dedicated community member, a generous people person, and devoted most of all to his family. He left this world a better place on November 11, 2021 at 77 years, 4 months, and 17 days of age. Doyle was born to John C.... View Obituary & Service Information

The family of Doyle W Nimmo (Buffalo) created this Life Tributes page to make it easy to share your memories.

Doyle Wayne Nimmo was a dedicated community member, a generous...