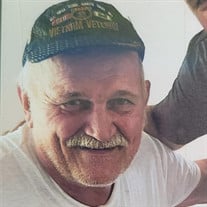 Dr. Michael (Mike) Allen Buttenob, 78, of Mansfield, Missouri, died Saturday, May 8th, 2021, at 2:30 a.m., at Missouri Veterans Home in Mt. Vernon, Missouri. Services will be held graveside at Missouri Veterans Cemetery in Springfield, Missouri, on May 20th at 10:00 a.m. Dr. Buttenob was born September 17, 1942, in Davenport, Iowa. He was married in 1994, to Lois Clark of Mansfield, for 25 years. He was raised in Davenport, and was a graduate of Davenport High School. During those early years he met and later married Susanne Roete, also of Davenport, the mother of his three sons. After high school, Mike attended Otero Junior College in Colorado, and later attended the University of Wyoming on a football scholarship. Mike enlisted in the United States Army in 1963, and served with the 173rd Airborne Brigade in Okinawa and Vietnam as a paratrooper. His unit was one of the first deployed to Vietnam in May 1965, with their first task of defending the airbase in Bien Hoa. His military service also included being a dog handler and Military Police. The difficult years he served while in Vietnam helped him realize he was a person who deeply desired to help others. After returning to the states, he enrolled in Palmer College of Chiropractic in Davenport, and graduated in 1971 with his Doctorate in Chiropractic. He had a life-long career as a chiropractor in Missouri, Iowa, and Australia, helping many people. Mike was a gifted chiropractor, always insisting on helping those in pain and showing them the path of better health. Mike will be greatly missed. Survivors include his widow, Lois; three sons, Tom Buttenob, Wasilla, AK, John Buttenob, Taylorsville, UT, and Chris Buttenob, Scottsdale, AZ; his bonus kids, Jim Clark, Ozark, MO, Rebecca Clark, Don Clark, and Jeff Clark - all of Seymour; 15 grandchildren and five great-grandchildren; and sister, Meriellen Kronfield, Davenport, IA.

The family of Dr. Michael Allen Buttenob (Seymour) created this Life Tributes page to make it easy to share your memories.