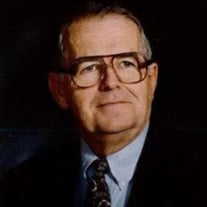 Dr. Victor B Slaughter, son of Rudie Wright Slaughter, Sr. and Margaret E. Blankenship Slaughter, was born May 23, 1933, in Kennett, Missouri. He departed this life Friday, January 7, 2022, in Benton House Assisted Living, in Olathe, Kansas, at the age of eighty-eight years, seven months, and fifteen days. Vic married Sybl Dell Blakemore and this family was blessed with one daughter and two sons. He was preceded in death by his parents; one brother, Rudie W. Slaughter, Jr.; and two sisters, Elizabeth Neeley, and Margaret Baker. Vic is survived by his loving wife, Sybl, of the home; a daughter, Jennifer DeHaan, and her husband, Keith, of Kansas City, Missouri; two sons, George Slaughter, and his wife, Vicki, of Olathe, Kansas; V. Blake Slaughter, and his wife, Kristen, of Ballwin, Missouri; five grandchildren; a brother, Allen Slaughter, of Fulton, Missouri; a brother-in-law, Dan Neely, of Cape Girardeau, Missouri; several nieces and nephews; as well as a host of other relatives and many friends. He was born and raised on a cotton farm near Senath, Missouri, and graduated from Senath High School. He entered the ROTC program through the University of Missouri and graduated with a Bachelor of Science in Agriculture as a 1st Lieutenant in the United States Army. He also was the Ag Sig President. He served his country faithfully for two years, spending sixteen months in Korea guarding the Freedom Bridge. He then began his career in education as a Vocational Agriculture instructor at the Senath High School, while working on his masters and specialist degrees from the University of Missouri. He was a member of the prestigious Mystical Seven National Society and the Scabbard and Blade while a student at the University of Missouri. He then was the Assistant Superintendent of Schools for Liberty, Missouri School System for ten years while working on his Doctorate Degree and obtaining his practical experience. During this time he and Sybl were married and began raising their family. In 1973, the family moved to Lebanon, Missouri, where Vic became the Superintendent of Schools of Lebanon R-III Schools. Vic was proud that the city passed a school bond on the first try in order to build a new Senior High School. Among some of the many things he accomplished while superintendent was to reorganize the school district, build the Bi-Centennial track at the high school, and making various additions to every building. He was also honored when the Junior High School library was named after him. After serving as Superintendent for the Lebanon Schools until 1989, Vic began a second career at the Missouri Department of Education where he worked as the Director of Finance. He worked with the Department of Elementary and Secondary Education and was awarded the Emeritus Service Award, the Pioneer Award and several others. He was honored by the Missouri Legislature for his years of service to elementary and secondary education. Vic made his profession of faith in Christ early in his life and was very active in the First Christian Church (Disciples of Christ) in Lebanon. He had served on various committees, had been a Sunday school teacher, was chairman of the church board, and also served as an Elder. He was a devoted Christian man who cared deeply for others. He was a member of the Lebanon Rotary Club where he was President twice and was a Paul Harris Fellow. He served on the Lebanon Chamber of Commerce and was a member of the Lebanon Ambassadors. He received two Outstanding Service Awards and was presented with the recognition of placement on the Lebanon Wall of Honor in 2013. He enjoyed fishing, reading, fixing things, gardening and things to do with agriculture, and was very mechanically inclined. He had a keen sense of humor and never took himself too seriously. His wit, humility and his charm were evident in his daily life. Vic was a loving husband, father, grandfather, brother, uncle, and was a caring friend. He will be fondly remembered for his love of family, concern for public education, involvement in community and church, and a great friend to many. Service for Vic B Slaughter will be 2:00 p.m. Friday, January 14, 2022, in the Lebanon First Christian Church with Rev. Greg Turner officiating under the direction of Holman-Howe Funeral Home of Lebanon. Following the service, a committal service with Full Military Honors will be held at the Lebanon High School Alumni Plaza in Lebanon. Burial will be in the Memorial Park Cemetery in Columbia, Missouri.

The family of Dr. Vic B Slaughter (Lebanon) created this Life Tributes page to make it easy to share your memories.