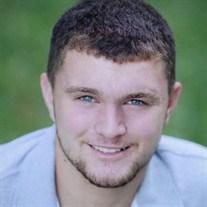 Dylan Chase Clarke was born November 23, 1997, in Springfield, Missouri, to Melisa D. Sartin and Ryan M. Clarke. Sadly, succumbing to injuries sustained in an accident, he departed this life Sunday morning, June 27, 2021, in Seymour, Missouri, at the much too young age of twenty-three years. Dylan was raised in Seymour and a graduate of the Seymour High School Class of 2016. Dylan was active in many school programs including basketball, baseball, and was a member of FFA. From the age of ten, he made his own money mowing lawns. While in high school, he took his first job at Kleier’s and later worked at Dynomite Fireworks for a summer. He was currently employed with Dura-Line Corp. in Mountain Grove. Dylan was a popular kid who was liked by all and known for his jokes and smiles. He was a loyal friend, and his crew of buddies from school were still tight as ever today. After high school Dylan joined the Army National Guard in September, 2017, where he was an E4 Specialist and was currently Active Duty and assigned to the Springfield Armory. Early on Dylan had a natural talent for chess. At age 6, he joined the Seymour R-II School Chess Club, a group whose members were generally older youths, and played mighty-might football for one year. Physical fitness and good health were extremely important to Dylan, and he worked out at the gym regularly. He also went with his Pappa Bob to River Rats in June and took guitar lessons with Dr. Lair his senior year. Most important to Dylan was his daughter Leah. When he was not working or at the gym, he was spending time with her. Dylan was a hands-on and fun-loving dad. Together they spent countless hours at the park, going to the creek, and playing outside in the yard on her swingset that she called her “playground” as well as swimming at the YMCA. Family preceding Dylan in death were his mother, Melisa; maternal great-grandparents David and Nadine Sartin, and Peggy Hoggatt; paternal grandparents Robert H. and Dorothy L. Douglas Clarke, and paternal great-grandfathers Cornelle Amanasan, and Robert “Moose” Clarke; and maternal great-uncle Billy Hoggatt. Surviving Dylan are his dad Ryan Clarke of Seymour; brother Corey Sartin; daughter Leah Jean Clarke and her mother Darrian Noonan of Seymour; maternal grandparents Bob and Carol Sartin, and Paulette Thomas – all of Seymour; paternal grandmothers, Kathleen Amanasan of the State of Idaho, and Mary Coble of Springfield, and paternal great-grandmother Shirley Amanasan of the State of California; aunts, Shanna Noonan and husband Jason, Bobbie Sartin-Long and husband Kevin, and Hollie Harbison and husband Robbie, and uncle Cody Clarke; several great-aunts and great-uncles, cousins; and countless friends, classmates, coworkers, and comrades. Dylan was a beloved son and grandson. He was an adored and devoted dad. He was a caring nephew and cousin. He was a loyal brother and best friend. Dylan has left us much too soon, but he did a whole lot of living in his almost twenty-four years on this earth and those memories and moments shared with family and friends will be treasured in hearts forever. A memorial has been established and may be made to The Clarke Family or Leah’s College Fund and may be left at the funeral home. Funeral Services for Dylan Clarke will be at 1:00 PM, Wednesday, June 30, 2021, at Holman-Howe Funeral Home, Seymour, Missouri. A visitation will be held one hour prior to the service. Burial will follow in Ava Cemetery, Ava, Missouri, with military honors following his service.

The family of Dylan Chase Clarke (Seymour) created this Life Tributes page to make it easy to share your memories.