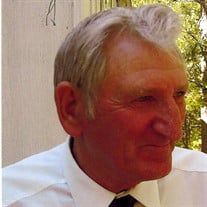 Earl Lloyd Devore, son of Clint and Edith Skinner Devore, was born March 4, 1937, in Phillipsburg, Missouri. He departed this life Friday, July 9, 2021, in his home, near Stoutland, Missouri, at the age of eighty-four years, four months, and five days. On May 28, 1968, he was united in marriage to Martha Varner, and they shared thirty-six years before her passing in 2004. He was also preceded in death by his parents; and two step-children, Marie Varner, and Alan Varner, and his wife, Teresa. Earl is survived by his significant other, Nancy Murrell, of the home; three step-daughters, Jackie Anthony, of Lebanon, Missouri, Linda Ingram, and her husband, Preston, and Kathy Alford, and her husband, Hines, all of Springfield, Missouri; a step-son, James Murrell, of Lebanon, Missouri; eighteen grandchildren; twenty-three great-grandchildren; a brother, Charles Devore, of the State of Colorado; four sisters, Burley Isaacs, Dolly Banks, Joyce Blackburn, and Wilma Knapp, all of Lebanon, Missouri; several nieces and nephews; as well as a host of other relatives and many friends. He was raised in the Sleeper and Stoutland areas in Laclede County. He entered the military as a young man and served his country faithfully in the United States Army for four years. After being honorably discharged from the Army, he returned to the Sleeper and Stoutland areas and worked as a truck driver for many years. He then operated a sprinkler system business and later operated a nursing home in Buffalo, Missouri for a time. He was a preacher of the gospel and evangelist covering many states. His ministry touched many hearts through the years. In his spare time he enjoyed being outdoors where he liked fishing. He also enjoyed going to auctions and sale barns. He was a collector of clocks. His family was very important to him and he enjoyed having time with all his family when he could. Earl was a loving companion, father, grandfather, great-grandfather, brother, uncle, and was a caring friend. We celebrate his life and know that his family and friends will treasure the wonderful memories he made for them during his lifetime. Full military honors will follow the service at the funeral home, prior to the burial in Springfield, Missouri

Earl Lloyd Devore, son of Clint and Edith Skinner Devore, was born March 4, 1937, in Phillipsburg, Missouri. He departed this life Friday, July 9, 2021, in his home, near Stoutland, Missouri, at the age of eighty-four years, four months, and... View Obituary & Service Information

The family of Earl Devore (Lebanon) created this Life Tributes page to make it easy to share your memories.