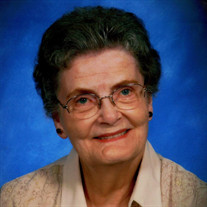 Edith Jean Royal, daughter of Lawrence and Eunice Chandler Hockey, was born January 10, 1927, in Flint, Michigan. She departed this life Sunday, October 3, 2021, in Osage Beach, Missouri, at the age of ninety-four years, nine months, and two days. On June 9, 1946, she was united in marriage to James Benton “Bud” Royal, and to this union one son was born. She was preceded in death by her parents; and her husband of fifty-six years, Bud, on February 4, 2003. Edith is survived by a son, Ben Royal, and his wife, Sandra, of Montreal, Missouri; two grandchildren, Tommy Royal, and his wife, Katie, of Montreal, Missouri, and Michelle Becker, and her husband, Brian, of Richland, Missouri; four great-grandchildren, Ryan, Hallie, Kayden, and Kaylee; three sisters, Etta Peace, of Kimberling City, Missouri, Sue Richards, and her husband, Don, of Diamond Head, Mississippi, and Eileen Fraiser, of Fort Wayne, Indiana; several nieces and nephews; as well as a host of other relatives and friends. She was raised in Springfield, Missouri, and graduated from Central High School, in the Class of 1944. One of Edith’s non-school experiences was a summer spent in Independence, Missouri. She worked at an ammunition factory where she inspected 30 Caliber ammunition for the United States military. In 1949, she and Bud left Springfield, and were off to Truman, Arkansas for employment with the Frisco Railroad Company. They attended Sunday school and church at the Methodist Church on the first Sunday after they arrived in Arkansas. The school principal was a member of the Sunday school class and after he found out that Edith had some college credit hours, he offered her a job as a substitute teacher. She fell in love with the job and the kids. She then enrolled in summer school at Arkansas State University and in 1953, received her degree. She later earned her Master’s Degree from Drury University. In 1964, the family moved to Lebanon, Missouri, and Edith took a job at the Lebanon High School. She taught social studies at L.H.S. until her retirement. During her tenure, she served as Head of the Department of Social Studies, and was the head advisor for the Student Council. She was in the school classroom for thirty-three and one half years. Edith was a long time active member of Lebanon First United Methodist Church where she taught the Builders Sunday school class for many, many years. She remained involved in her church for as long as her health allowed. She had a very active life supporting her community and her profession. In 2017, she was the recipient of the Lebanon Wall of Honor award. She loved her family dearly and especially enjoyed having time with her grandchildren and great-grandchildren. Edith was a loving mother, grandmother, great-grandmother, sister, aunt, and was a caring friend. We celebrate her life and know that she will be remembered for her devotion to family, her dedication to teaching and her students, and for the friendships she made in the community. Funeral services will be Thursday, Oct. 7 at 11 a.m. in the First United Methodist Church in Lebanon with Rev. Marsha Vincent officiating. Visitation will begin at 10 a.m. in the church until service time. Burial will be in Mount Rose Memorial Park. A memorial has been established to First United Methodist Church and may be left at the funeral home.

The family of Edith J. Royal (Lebanon) created this Life Tributes page to make it easy to share your memories.