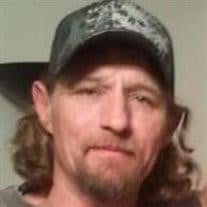 On a cold December day after all evidence of Christmas had been tucked away for another year, Edward Allen Zachary made his grand entrance into this world on December 30, 1966. There was someone so excited to become a big sister, Jackie Lea Zachary. Ed grew up on a small farm outside of Weaubleau, Missouri. Known by most as the Kings’ Ed was raised by his grandma, Rosa Lea Zachary which came with amazing perks. One would be growing up with cousins George DAVID King, Davona Kathryn King, and Thomas Gene King, making them more like brothers and sisters. His Uncle David Gene King taught him a trait and skill he would use most of his life, a roofer he became. There was never a wall he could not scale or a beam he would not walk. Fear was never a factor. Aunt Romona Jean King was there and taught him how to pray. Dusty Allen Zachary would make him a father for the first time. Not long after that Ed would meat Paula Elaine Rains, that relationship came with his daughter Haylie Anne Brockett-Seaton It did not take long for his family to grow even larger. Another baby boy Clayton Edward Zachary arrived. It would be another 8 years later that took him on one of the most emotional roller coaster rides that Ed would ride. That ride would be named Creedance Cahl Zachary. A ride of having a micro preemie. Just when thinking his family was complete, the baby of his family would be born. Chance Miles Zachary would complete the title of Dad for Ed. Known to all as the rambling man, he never stayed in one place long. Ed traveled the western stats with his family. The adventures were countless. It did not take long for his children to learn that Dad was a much better cook than mom. Ed could take nothing and turn it into something amazing. Ed was called many names Edward, Ed, Eddie, EZ Bones. Did not make any difference how you knew him he answered to all of them, even the people. Korbin Zane Seaton, Gemma Mae Seaton, Michael Allen Evan Zachary, Dusty Allen Zachary JR, Persephone Dawn Zachary, Maddison Michelle Zachary, Kegan Anthony Zachary, and Caleb Isaac Edward Zachary gave him the name Grandpa. When being Grandpa, the chocolate milk and candy flowed like the water of his favorite fishing spot. Ed had the Uncle spot covered also. Jamie Marie Miller Hicks and Danny Lee Miller called him Uncle Eddie. EZ was always ready to rock-n-roll at the drop of a hat. When Hudgens and Zachary were rocking together you better step aside. You never knew what was about to go down. He was always willing and the first one there to help anyone do anything. No matter how much grumbling that might be done. Eddie spent the last few years of life with his companion Arlene F Johnson. On May 27th, 2021 Ed Zachary received a phone call with a job offer, a job offer that he would accept but would not be returning from. This would be a permanent station. When reporting to his head supervisor, he found many waiting anxiously to welcome him abroad. Grandma Rosa Lea Zachary with fried chicken in her hands. His dad, Jack Edward Zachary wanted help loading the moving truck. Uncle David and cousin Davey had his brand new roofing hammer waiting for his use. Many others with a to-do list as well. Ed will be missed by all left behind. How lucky we are to have something that makes saying good-bye so hard. Life has to end, but love never will. Arrangements for Edward will be held Thursday, June 3, 2021 at 2:00 PM at the Butler Funeral Home in Humansville, MO. Visitation will be held the hour prior from 1:00PM - 2:00 PM at the Funeral Home. To send flowers or a memorial gift to the family of Edward Zachary please visit our Sympathy Store.

On a cold December day after all evidence of Christmas had been tucked away for another year, Edward Allen Zachary made his grand entrance into this world on December 30, 1966. There was someone so excited to become a big sister, Jackie Lea... View Obituary & Service Information

The family of Edward Zachary (Bolivar) created this Life Tributes page to make it easy to share your memories.

On a cold December day after all evidence of Christmas had been...