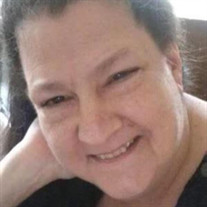 Elizabeth Ann Martin, daughter of Robert and Darlene Santos Hildreth, was born November 3, 1961, in Oakland, California. She departed this life Friday, June 25, 2021, in Cox South Medical Center, in Springfield, Missouri, at the age of fifty-nine years, seven months, and twenty-two days. Her parents preceded her in death. Elizabeth is survived by three daughters, Moriah Ellis, and her husband, Dustin, of Lebanon, Missouri, Melissa (Martin) Roob, of Marion, Iowa, and Margaret Stanley, and her husband, Chris, of Rome, Georgia; thirteen grandchildren; one great-great-grandchild; five brothers, Robert Hildreth, of the State of Wisconsin, Mike Hildreth, of Albion, Iowa, T.J. Hildreth, Jim Hildreth, both of Grinnell, Iowa, and Steve Hildreth, of Boone, Iowa; two sisters, Patricia Lawrence, of Marshalltown, Iowa, and Kathy Harrison; a number of nieces and nephews; as well as a host of other relatives and friends. She was raised in various locations while her father was serving in the military, but lived mostly in Iowa. She continued to make her home in Marshalltown, Iowa after graduating from high school, and became a devoted homemaker to her family. In 2017, she moved to Lebanon, Missouri. Elizabeth had a deep abiding faith in God and loved reading her Bible. In her spare time she enjoyed taking walks, and drawing. She was very artsy and had a creative mind. She always had a positive attitude and loved watching Disney movies. Her family was very important to her and she especially enjoyed her grandchildren and great-grandchildren. Elizabeth was a loving mother, grandmother, great-grandmother, sister, aunt, and was a caring friend. We celebrate her life and know that her family and friends will cherish the wonderful memories she created for them during her lifetime.

The family of Elizabeth Ann Martin (Lebanon) created this Life Tributes page to make it easy to share your memories.