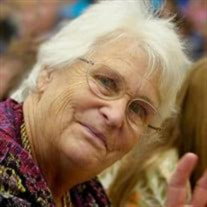 Ella Lou Winder, born October 4, 1937, of Bolivar, Missouri, entered into heaven on March 1, 2022. She was born in Brown Branch, Missouri to Orville Washington Johnson and Ruth Bell (Turner) Johnson. She was proceeded in death by her husband LaVan Dale Winder (2016), son Tharin Cord Winder (1976), brother Jim Johnson, sisters Ann Gordon and Betty Battenburg, and her parents. Lou was raised in Taney County, Missouri and graduated from Ava High School in May of 1956. She traveled to the West Coast and worked as a telephone operator before returning to Missouri and marrying LaVan Dale Winder on May 31, 1960. During their time of dating Lou was an avid “Pepsi Girl” promoting and distributing the Pepsi Brand. She and Van started their family on “the farm” in Dunnegan, Missouri while she worked as the secretary for Dodson Williams Automotive in Springfield, Missouri from 1961-1972. In 1972 Lou and Van bought Hilltop Restaurant which they ran as a family business for thirteen years. During this time, a fleet of catering trucks was added and served Polk County and the surrounding areas with mobile food and drink to the High School, local businesses and area auction services until 2017. The entire Winder family were known for providing food services to many events such as The Ride for Life, Fair Play Mercantile dance and auction, Arnica Days, Polk Count Fox and Wolf Hunters Association, Harrison Round Up, Mother's Day Ride Against Cancer, Bart Harper Speed and Drive, the Osceola Sale Barn, and Hillbilly Gran Prix Racing. Lou is survived by her loving family Sondra Starbird, Kayla (Steve) Rippee, Rebecca (Kelly) Wicklund and adopted daughter Lisa McCart; her grandchildren Kiefer (Racheal) Starbird, Conner Starbird, Ryan (Samantha) Rippee, Lane (Erin) Rippee, Dallas (Samantha) Wicklund, Brody Wicklund, Shanteal Wicklund, and Farin Koda Wicklund; her great grandchildren Ivory Lynn Wicklund, Augustus LaVan Wicklund, and Sloane Rae Starbird. Lou was an incredibly hard-working woman who loved her children and grandchildren, enjoyed being with people, and helping others (that is how Lisa came to be a part of the family). Other passions included gardening, swimming, nursing sick animals and, as Van would say, gallivanting. Visitation will be held at Aldrich United Methodist Church at 1 PM on Saturday, March 5th, with service immediately following at 2 PM. In lieu of flowers, or if you had an open account in the charge book, donate to an organization of your choice in memory of Lou. “In three words I can sum up everything I've learned about life. It goes on.” — Robert Frost, American poet. Services for Lou will be held Saturday, March 5, 2022 at the Aldrich First United Methodist Church at 2:00 PM. Visitation will be held one hour prior starting at 1:00 PM. Memorial donations may be made to the Boy Scout Troop 45. To send flowers or a memorial gift to the family of Ella Lou Winder please visit our Sympathy Store.

Ella Lou Winder, born October 4, 1937, of Bolivar, Missouri, entered into heaven on March 1, 2022. She was born in Brown Branch, Missouri to Orville Washington Johnson and Ruth Bell (Turner) Johnson. She was proceeded in death by her husband... View Obituary & Service Information

The family of Ella Lou Winder (Bolivar) created this Life Tributes page to make it easy to share your memories.