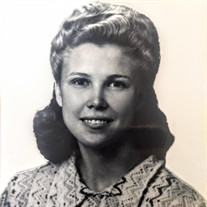 Enola Vivian Clinkenbeard, daughter of Galey and Ethel Wyatt Gann, was born February 5, 1925, near Phillipsburg, Missouri. She departed this life Friday, October 22, 2021, in Jacob’s Ladder in Springfield, Missouri, at the age of ninety-six years, eight months, and seventeen days. On June 2, 1946, she was united in marriage to John Maurice “Morris” Clinkenbeard and to this union four daughters and one son were born. She was preceded in death by her parents; her husband, Morris, on August 20, 1995; two grandsons, Bryan Wallace and John Wesley Wright; two brothers, Paul and Vernard Gann; and a sister, Madeleine Gann. Enola is survived by her five children, Mary Lynn Harleman, and her husband, Allen, of Yakima, Washington, John Paul Clinkenbeard, and his wife, Rita, of Phillipsburg, Missouri, Lenna Ruth Wright, and her husband, Ron, of Menifee, California, Audrey Rea Kuykendall, and her husband, Larry, of Kansas City, Missouri, and Lois Ann Wallace, of Willard, Missouri; seventeen grandchildren; nineteen great-grandchildren; a number of nieces and nephews; as well as a host of other relatives and friends. She was raised on the family farm in Laclede County, and graduated from high school. During World War II and before she was married, she worked at a bomber plant in Schenectady, New York and then was a bookkeeper for a factory in Omaha, Nebraska. After the war, she returned to Laclede County where she and Morris were married, and they lovingly raised their family. Through the years, she was a devoted homemaker to her husband and family and also worked as a bookkeeper at Vernon and Sons for a number of years. Enola made her profession of faith in Christ early in her life and was a longtime member of Community Baptist Church. In her spare time she enjoyed quilting, gardening, growing beautiful plants and flowers with her amazing green thumb. She also liked feeding and watching the birds. Her family was very dear to her and she especially enjoyed having time with her grandchildren and great-grandchildren. Enola was a loving mother, grandmother, great-grandmother, aunt, and was a caring friend. We celebrate her life and know that her family and friends will cherish the wonderful memories she created for them during her lifetime. Visitation for Enola Clinkenbeard will be held Friday, October 29, 2021 at 10:00 AM at Community Baptist Church in Lebanon, MO. Funeral services will be held Friday, October 29, 2021 at 11:00 AM at Community Baptist Church in Lebanon, MO. Memorial contributions can be made in Enola’s honor to the Community Baptist Church.

The family of Enola V. Clinkenbeard (Lebanon) created this Life Tributes page to make it easy to share your memories.