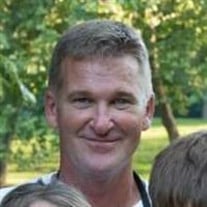 Eric Bruce Boshe, son of Thomas and Marion Lee Yarbrough Boshe, was born May 11, 1960, in Mahopac, New York. He departed this life Friday, February 26, 2021, in Mercy Hospital, in Springfield, Missouri, at the age of sixty years, nine months, and fifteen days. His parents preceded him in death. Eric is survived by his wife, Dee, and his two sons, Joey and Tommy Boshe, all of the home; two daughters, Amanda Hyde, of Marshfield, Missouri, and Jamie Jones, of Bolivar, Missouri; three grandchildren; two brothers, Rick Boshe, of Great Barrington, Massachusetts, and Mark Boshe, of Marshfield, Missouri; two sisters, Cheri Walsh, of Bolivar, Missouri, and LeeAnn Schacher, of Willard, Missouri; several nieces and nephews; and many friends. He was born in upstate New York, and then moved with his family to Bolivar, Missouri, when he was thirteen years old. He graduated from Bolivar High School in 1978, and attended Southwest Baptist University. He joined the United States Air Force in 1980, and served for two years. He would spend the next twenty years in sales where he would find many of his lifelong friends and eventually meet his wife. On May 21, 1996, he was united in marriage to Deanna Louise Fort and they have shared the last twenty-five years. Together they would raise two boys, one being mentally disabled. Eventually, they settled in Lebanon and started a business together. Eric loved family, especially his children and was very proud of them. He loved making them laugh, especially his autistic son. He taught them about the love of Christ and that the compassion he showed people was not from him, but Christ in him. He had a way of connecting to everyone he met. He loved talking to people, especially those who were struggling in their lives. He would lift them up through laughter so that for a moment their pain was gone. He had a special place in his heart for veterans and never missed the opportunity to thank them for their service. If he called you friend, he meant it and would do anything for you if he could. His love for his wife was undeniable. He told everyone he met. It was hard for him to understand how someone who knew all his flaws and the “demons” that he struggled with would still stay by his side. “She is my rock”, he would say, “I don’t know where I would be without her.” When he wasn’t with his family, he enjoyed being outdoors; hunting, fishing, golf, and gardening. He liked listening to all different types of music. He loved cooking, but his favorite past time was watching his youngest son play sports, because it brought back a time for him when he was young and strong and competitive. He was the light that walked into the room, the “life of the party”, and he will truly be missed.

The family of Eric B Boshe (Lebanon) created this Life Tributes page to make it easy to share your memories.