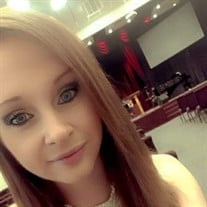 Erin Dawn Nichols Treece, daughter of Jarrett Nichols and Shawnya Matney, was born February 7, 1993, in Springfield, Missouri, and departed this life on June 5, 2021, in Springfield, Missouri, at the age of twenty-eight years, three months, and twenty-eight days. She was united in marriage to Justin Treece on December 14, 2020. She was preceded in death by her paternal great-grandparents Bobby and Norma Stephens, and maternal grandfather Jimmy Hyder. Erin is survived by her husband Justin Treece; two stepchildren, Jordyn and Axel Treece; father Jarrett Nichols and his wife, Mindy, of Norwood; mother Shayna Matney of Mansfield; three brothers, her twin brother Darron Nichols and his wife, Ashley, Chace Bell, and Zander Hanson – all of Mansfield ; two sisters, Tara Robinson of Ohio, and Jade Cantrell of Mansfield; nieces, Chloe Nichols and Kensley; nephew Kai; paternal grandparents Sandy Adamson and her husband, Lance, of Mansfield; maternal grandmothers, Debra Henry of Mansfield, and Debbie Wright of Lebanon; parents-in-law Kent and Renee Potts of Ava; other relatives and many friends. She was born in Springfield, but lived most of her life in Mansfield. She attended Mansfield Schools and worked at Subway for several years and had attended the Hartville Freewill Baptist Church. In her spare time she loved listening to music, enjoying wildlife (especially catching snakes and spiders), and was a “social butterfly” interacting with people. Funeral services will be Thursday, June 10 at 11 a.m. in Holman-Howe Funeral Home Chapel in Mansfield. Visitation will be Thursday, June 10 from 10 a.m. - 11 a.m. Burial will be in the Mansfield Cemetery.

The family of Erin Dawn Nichols Treece (Mansfield) created this Life Tributes page to make it easy to share your memories.