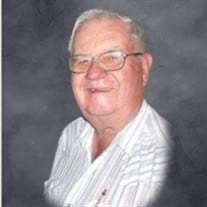 Estal Dale Stewart, age 90 of Bolivar MO, passed away on February 13, 2022, peacefully at his home. Estal, the first of four children, was born on June 8, 1931, to Oles and Okla (Hawkins) Stewart at the family farm in Halfway, MO. Estal grew up in Halfway graduating in the class of 1948. He served in the Army from 1952 to 1954 working as a diesel mechanic on the trains during the Korean War. In February 1957, Estal met Bonnie Carr at a skating rink in Springfield, MO. They were married three months later on May 15, 1957, and unto this union three sons were born, Dale Leroy, Lendell Ray and Wendell Jay. In 1963 Estal and Bonnie started a business, Stewart Concrete Products, in Halfway, MO, making septic tanks for Polk and surrounding counties. The business soon grew to provide other supply needs as well. In 1989 Estal and Bonnie sold the business to the late Ron Hendrickson. They then spent many years traveling and pursing various hobbies. Estal always had a good work ethic and enjoyed the many jobs he had over the years. He often told stories of hauling milk, during the time that you had to carry a milk can in each hand. Or about the late nights he spent digging graves with the help of his two sons, Dale and Lendell. He shared that his favorite job was owning and operating Stewart Concrete Products, as he enjoyed making the forms and the complexity of designing them so that everything measured correctly for the finished product. Estal and Bonnie always appreciated the many employees that soon became like family to them during their years at Stewart Concrete Products. Estal was always quick to remind us that if it weren't for the Lord and His direction, he could not have accomplished the things that he did. He reminded us often in his last several years of how the Lord blessed his family, always giving the glory to God. Estal is preceded in death by his parents, Oles and Okla Stewart, his sons Wendell Jay and Dale Leroy, his grandson-in-law Justin Cleveland, his sister Imogene Morris and her husband Roma, brother-in-law Charles Brown, and brother-in-law Darrell Ashlock. Estal leaves behind and will be missed by many including his wife of 64 years, Bonnie, of the home, his son Lendell Stewart and daughter-in-law Cheryl, his granddaughter Karen Cleveland, his grandson Brandon Stewart and wife Laura, as well as five great-grandchildren, Jaren Cleveland, Jaydon Cleveland, Bishop Stewart, Kingston Stewart and Ireland Stewart, he also leaves behind his sisters Nadean Ashlock and Shirley Brown. In lieu of flowers the family suggest memorial donations be made to Polk County Christian School or to The Gideons International. Visitation for Estal Stewart will be held Wednesday, February 16, 2022, from 5-7 PM at Butler Funeral Home in Bolivar, MO. Funeral Services will be held on Thursday, February 17, 2022, at 11 AM at Wellspring Baptist Fellowship in Bolivar, MO. Burial will be held at Crestview Memorial Gardens in Bolivar, Missouri. To send flowers or a memorial gift to the family of Estal Stewart please visit our Sympathy Store.

Estal Dale Stewart, age 90 of Bolivar MO, passed away on February 13, 2022, peacefully at his home. Estal, the first of four children, was born on June 8, 1931, to Oles and Okla (Hawkins) Stewart at the family farm in Halfway, MO. Estal grew... View Obituary & Service Information

The family of Estal Stewart (Bolivar) created this Life Tributes page to make it easy to share your memories.