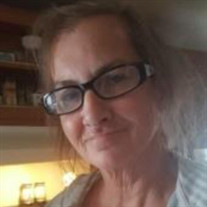 Esther Lee Black, daughter of the late Hugh & Sandra (Cox) Byler, was born on January 1, 1964 and departed this life on June 3, 2021. At the time of her passing she was fifty-seven years, five months and two days of age. Esther was preceded in passing by her parents; and two brothers, Milton Byler and Matthew Byler. She is survived by her children, Jacob and wife Brittany Oestreich, Samantha Oestreich and boyfriend Martin Boggs, Nicholas Oestreich and girlfriend Cristal Moore and Travis Nichols; grandchildren, Sondra Williams, Julie Williams, Temperance Boggs, Cameron Boggs, Alijah Boggs, D.J. Carstensen, Zoey Carstensen, Logan Lutjen, Macy Lutjen, Larissa Mota, Landon Mota, Nicholas Oestreich Jr., and Noah Oestreich. She also leaves behind a host of several friends and other family members who will all truly miss her. Esther was born in Jefferson City, Missouri but raised in Linn Creek, Missouri. After finishing her schooling, she met Kevin Oestreich and together they moved to Idaho where they started their family; having two children, Jacob and Samantha. She then moved back to Linn Creek, Missouri where she had her two more children, Nicholas and Travis. Esther loved to go swimming, dancing and spending time with her family. She truly dedicated her life to caring for her children and making sure they always had what they needed and were always happy. Esther Lee was a Harley girl who couldn't resist a bike ride with an old friend, horseback riding bareback with a complete wild spirit, shoeless country girl that loved the river bed and old Rock 'n Roll. She was thrown a hard life and fought like hell to the end. Her children took turns taking care of her for the final 10 years of her life; until she was fully disabled and completely dependent. She passed away in her eldest son’s arms, cradled with love, surrounded by some of her grandchildren and knowing she was safe. He made sure she knew she was loved and that it was okay to let go, that she didn't have to fight any longer. Although, she was the one with many health issues, she outlived her twin younger brothers and both of her parents. Funeral services will be Friday, June 11 in Linn Creek Baptist Church. Visitation will be held from 1- 2 p.m. on Friday in the church. A memorial has been established to Allee-Holman-Howe Funeral Home and donations may be left at the funeral home. Arrangements are under the direction of Allee-Holman-Howe Funeral Home.

Esther Lee Black, daughter of the late Hugh & Sandra (Cox) Byler, was born on January 1, 1964 and departed this life on June 3, 2021. At the time of her passing she was fifty-seven years, five months and two days of age. Esther was preceded... View Obituary & Service Information

The family of Esther L. Black (Camdenton) created this Life Tributes page to make it easy to share your memories.