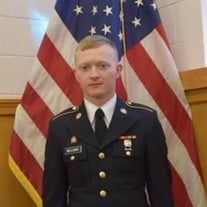 Ethan John Williams, son of Dennis and Allyson Bobbitt Williams, was born July 28, 1998, in Springfield, Missouri. He departed this life Friday, December 3, 2021, in Lebanon, Missouri, at the age of twenty-three years, four months, and seven days. While in high school Ethan met Dakota Williams on July 20, 2015 and two years later on July 20, 2017 he was united in marriage to Dakota, and they shared the last four years. He was preceded in death by his maternal grandparents, John Bobbitt and Connie Courtney; his paternal grandmother, Vicky Williams; and a grandmother, Helen Watson. Ethan is survived by his wife, Dakota, of the home; a son, Carter Lloyd Williams, of the home; his father, Dennis Williams, and his wife, Patty, of Lebanon, Missouri; and Allyson Bobbitt, of Mammoth Springs, Arkansas; two brothers, Nathan Williams, and Austin King, both of Lebanon, Missouri; four sisters, Bethany Williams, and Rebecca Williams, both of Lebanon, Missouri, Amber Williams, of Mammoth Springs, Arkansas, and Michaela Larue-Hargrove, of Crockett, Texas; two grandfathers, Mike Morgan, and Guy Piercy, both of Lebanon, Missouri; as well as a host of other relatives and friends. He was raised in the Lebanon, Missouri area and graduated from Lebanon High School in the Class of 2017. He then joined the United States Army and had served in Alaska for three years. He had a big heart, was kind of goofy and had a great sense of humor. He liked hunting for arrowheads and playing with Carter and video games. Ethan was a loving husband, father, son, grandson, brother, uncle and was a caring friend. We celebrate his life and know that he will be fondly remembered and greatly missed by all those who knew and loved him.

The family of Ethan J. Williams (Lebanon) created this Life Tributes page to make it easy to share your memories.