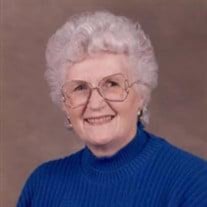 Doris Evelyn Robinson Holt was born November 18, 1925, in Cliquot, Missouri, to G.A and Delphia Carneal Armstrong. She passed away peacefully on Thursday, December 9, 2021, at Citizens Memorial Healthcare Facility in Bolivar, Missouri. Evelyn grew up in the Bolivar area, where she attended school, graduating from Bolivar High School in 1943. She married Gene M. Robinson in July 1947. They were married 25 years before Gene's death in 1972. In 1981, Evelyn married Powell Holt. They were together for 12 years until Powell’s passing in 1993. During her working life, Evelyn served in the Recorder of Deeds office in the Polk County Courthouse, and later helped run the family business, Robinson Grocery in Halfway. After closing the grocery business, Evelyn joined Farmers and Merchants Bank in Bolivar. She continued serving with Farmers and Merchants Bank (later known as Commerce Bank) until her well-earned retirement. Evelyn was a longtime member of the First Christian Church of Bolivar and enjoyed being active in the church. She was proceeded in death by her parents, a brother Bill Armstrong, her mother-in-law Minnie Robinson, her husband Gene Robinson, and husband Powell Holt. Evelyn is survived by her daughter Carol Brakebill (Jim) Halfway, MO, three grandchildren Lea Ann Keeling (Rob) Carthage, MO, Amy Sanders (Jeff) Bolivar, MO, and Scott Brakebill (Rachel) Springfield, MO. She is also survived by seven great-grandchildren: Matthew Keeling, Mallory Keeling, Josie Sanders, Madalyn Sanders, Olivia Sanders, Jameson Brakebill, and Owen Brakebill. She also leaves behind several cousins and many close friends. A private service for Evelyn will take place at a later time. In lieu of flowers, memorial contributions may be made to the Polk County Humane Society. To send flowers or a memorial gift to the family of Evelyn Holt please visit our Sympathy Store.

The family of Evelyn Holt (Bolivar) created this Life Tributes page to make it easy to share your memories.