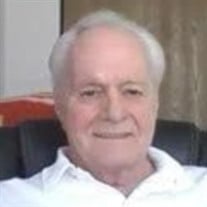 Everett Dean Davis, son of Darrell and Virginia Davis, was born December 24, 1947, in Springfield, Missouri. He departed this life Tuesday, May 18, 2021, in his home, in Lebanon, Missouri, at the age of seventy-three years, four months, and twenty-four days. On July 11, 2005, he was united in marriage to Diana Sue Hightower, and they shared the last few years. He was preceded in death by his parents; and a sister, Sharon Greshem. Everett is survived by his wife, Diana, of Grovespring, Missouri; three daughters, Bobbi Sue Davis, and her significant other, Dwight Myers, of Grovespring, Missouri, Kalita Davis, of Lebanon, Missouri, and Katlynn Davis, of Richland, Missouri; a son, David Collier, of Lebanon, Missouri; three granddaughters, Meah, Nevaeh, and Alainna; four grandsons, Joshua James, Dakota James, Mark and Stevie; a brother, Wayne Davis, of the State of Arizona; several nieces and nephews; as well as a host of other relatives and friends. He was raised in the Elkland community. As a young man, he entered the military and served his country faithfully in the United States Army during the Vietnam War. After being honorably discharged from the Army, he returned to the Lebanon area where he worked as a truck driver throughout the years. In his spare time he enjoyed reading, and watching westerns and NASCAR. He also was a fan of both the St. Louis Cardinals and the Kansas City Chiefs. He loved his family dearly and especially enjoyed his grandchildren. Everett was a loving husband, father, grandfather, brother, uncle, and was a caring friend. We celebrate his life and know that he will be fondly remembered and greatly missed by all those who knew and loved him. Private burial services will be held at a later date with full military honors. A memorial has been established and contributions may be made through the funeral home.

Everett Dean Davis, son of Darrell and Virginia Davis, was born December 24, 1947, in Springfield, Missouri. He departed this life Tuesday, May 18, 2021, in his home, in Lebanon, Missouri, at the age of seventy-three years, four months, and... View Obituary & Service Information

The family of Everett D. Davis (Lebanon) created this Life Tributes page to make it easy to share your memories.