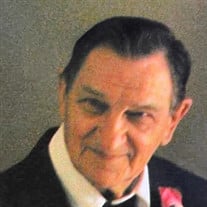 Floyd Avery Bailey, son of Willie Hunter and Mary Spurlock Bailey, was born December 16, 1931, in Cole Camp, Missouri. He departed this life with his family by his side, Tuesday, May 17, 2022, near Lebanon, Missouri, at the age of ninety years, five months, and one day. He was united in marriage to Ruth Erma Travis, and to this union three sons and three daughters were born. He was preceded in death by his parents; his wife of sixty-one years, Erma; a grandson, Scott Randolph Bright II, a brother, Ruben Bailey; and four sisters, Geraldine Owens, Bertha Purl, Thelma Holcroft, and Frances Naomi Oestrich. Floyd is survived by three daughters, Felisha Bowling, and her husband, Wayne, of Lebanon, Missouri, Diane Bright, and her husband, Scott, of Burlington, West Virginia, and Leota Dinwiddie, and her husband, John, of Richland, Missouri; three sons, Calvin Bailey, and his wife, Shirley, of Franklin, West Virginia, Willie L. Bailey, and his wife, Stephanie, of Granite City, Illinois, and Carlos D. Bailey, and his wife, Tina, of Richland, Missouri; eighteen grandchildren; thirty-eight great-grandchildren; a number of nieces and nephews; as well as a host of other relatives and friends. He was raised around Barnett and Versailles until his senior year of high school, when the family moved to Stoutland, Missouri where he graduated from high school. Floyd consecrated his heart to the Lord at the age of twelve and lived for the Lord for the rest of his life. He loved traveling with his mother when he was growing up, going to different states and numerous towns for revival meetings as his mother was an evangelist. He served his country faithfully in the United States Army in France during the Korean Conflict and after being discharged he went to Bible School at Central Bible Institute (CBI). While there he learned sign language and met his wife, who was also learning sign language to be an interpreter. After they were married, they made their home in West Virginia, and lovingly raised their family. Floyd worked at several different jobs through the years while serving as pastor at small country churches. He retired in 2004 and he and Erma bought a house in Richland, Missouri. He then went back to work and retired two more times, the last at the age of eighty-four. He moved in with his daughter and son-in-law in August of 2018 after Erma went to glory. He liked being outdoors and loved gardening. He was known as a hard worker, with a quiet nature and big smile. He was a little corny and sometimes had a mischievous sense of humor. He loved to play “Specials” on his harmonica at church. He leaves a legacy of faith in God. He was faithful until he drew his last breath. “Well done, thou good and faithful servant….and he entered the place the father prepared for him.”

Floyd Avery Bailey, son of Willie Hunter and Mary Spurlock Bailey, was born December 16, 1931, in Cole Camp, Missouri. He departed this life with his family by his side, Tuesday, May 17, 2022, near Lebanon, Missouri, at the age of... View Obituary & Service Information

The family of Floyd A. Bailey (Lebanon) created this Life Tributes page to make it easy to share your memories.