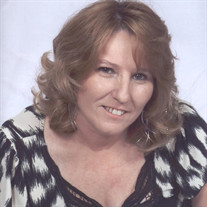 Frances Annette Barker, daughter of Walter and Blanch Cozine Barrow, was born on March 5, 1958, in Bonham, Texas. She departed this life Tuesday, February 1, 2022, in Blessing Hospital in Quincy, Illinois, at the age of sixty-three years, ten months, and twenty-seven days. On February 7, 1975, she was united in marriage to Charles Eugene Barker, and to this union one daughter and two sons were born. She was preceded in death by her parents; her husband, Charles, on June 28, 2017; two brothers and four sisters. Frances is survived by a daughter, Tracey Boucher, and her husband, Goel, of Lebanon, Missouri; two sons, Jim Barker, and his wife, Amanda, of Cape Fair, Missouri, and Greg Barker, and his wife, Jenny, of Lebanon, Missouri; four grandchildren, Nick, Katrina, Taryn, and Charlotte; two brothers, Gene Barrow, of the State of California, and Walter “Beau” Barrow, of the State of Missouri; four sisters, Pearl Counts, of the State of Arkansas, Patricia Mills, of the State of Missouri, Nelda Gromminger, of the State of California, and Linda Goodwin, of the State of Missouri; a number of nieces and nephews; as well as a host of other relatives and friends. She was raised in Texas and California and then came to Lebanon, Missouri and made her home. In addition to being a devoted homemaker to her husband and family, she worked in the Lebanon High School cafeteria as a lunch lady for several years. Frances had made her profession of faith in Christ and was an active member of Grace Calvary Full Gospel Church through the years. In her spare time she enjoyed working Jigsaw puzzles, and playing solitaire on her tablet, and playing her guitar. She could be a bit sassy, but had a delightful sense of humor and loved to laugh. Her family was always central in her life. Frances was a loving mother, grandmother, sister, aunt, and was a caring friend. We celebrate her life and know that her family and friends will cherish the wonderful memories she made for them during her lifetime. Memorial services for Frances Barker will be Friday, Feb. 11 at 2 p.m. at Grace Calvary Church in Lebanon.

Frances Annette Barker, daughter of Walter and Blanch Cozine Barrow, was born on March 5, 1958, in Bonham, Texas. She departed this life Tuesday, February 1, 2022, in Blessing Hospital in Quincy, Illinois, at the age of sixty-three years,... View Obituary & Service Information

The family of Frances Annette Barker (Lebanon) created this Life Tributes page to make it easy to share your memories.