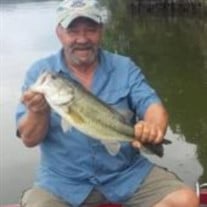 Gary Lee Crews, age 70, formally of Camdenton and Florissant, Missouri, died Thursday July 16th 2021. He passed peacefully in the comfort of his home in Ha Ha Tonka State Park at the foot of the Lake of the Ozark’s after a long battle with lung cancer. He was born on September 30, 1950 in St. Louis Missouri to Matt and Maizelle Crews. He attended school in St. Ann, Missouri. Later in life he was able to put himself through school to be an appliance repair technician. He went on to build a respectable career in the appliance repair business as the owner and operator of Crews appliance. He was most recently retired and in the process of passing the family business on to another family member. Gary was a well-known and respected individual in the appliance repair community in both St. Louis and at the Lake of the Ozarks. He is survived by his four loving children, Gary James, Jacob, Victoria, and Shelby. Gary was known as a loving and dedicated father that did whatever was needed to make the lives of his children better than his own. Beyond his work in the appliance repair world and dedication as a loving father, Gary was an avid Bass fisherman. He was known to travel around to various Bass tournaments in his younger years and always eager to have fishing rod in his hands as he aged. It was not uncommon to see him down on his dock or out on his boat trying to catch the next “big one” even at the end. One of his greatest qualities was his endless ability to talk to people and cultivate relationships. He was always willing to put down what he was working on to help another in need. Because of this, Gary was a well-known individual in his circles and always had people by his side that were willing to support him. You could almost say that he was a local celebrity to the residents of his neighborhood at Ha Ha Tonka State Park. “The Mayor”, as some residents referred to him, and his shining personality will be severely missed. A celebration of life will be held on Saturday, August 7, in Ha Ha Tonka State Park at 3 p.m. Arrangements are under the direction of Allee-Holman-Howe Funeral Home. To send flowers to the family or plant a tree in memory of Gary L. Crews please visit our Tribute Store.

Gary Lee Crews, age 70, formally of Camdenton and Florissant, Missouri, died Thursday July 16th 2021. He passed peacefully in the comfort of his home in Ha Ha Tonka State Park at the foot of the Lake of the Ozark&#8217;s after a long battle... View Obituary & Service Information

The family of Gary L. Crews (Camdenton) created this Life Tributes page to make it easy to share your memories.