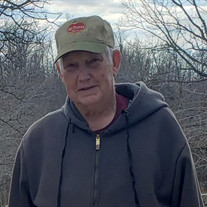 Gary William Pierce, son of Edmund William and Ruby Ethel Myers Pierce, was born November 22, 1949, near Falcon, Missouri. He departed this life Sunday, March 6, 2022, in his home, near Lebanon, Missouri, at the age of seventy-two years, three months, and fourteen days. On October 10, 1969, he was united in marriage to Kathern “Elaine” Breakfield, and to this union one daughter and one son were born. Kathern passed away on October 2, 2005. On September 4, 2010, he married Patricia Litton, and they shared the last 11 years of happiness and memories. He was also preceded in death by his parents. Gary is survived by his loving wife, Patricia, of the home, near Lebanon, Missouri; three daughters, Stacy Boyd, and her husband, James, Kristi Corbell, and her husband, Jeff, and Angela Baker, and her husband, Shane; a son, Jason Pierce, and his wife, Sarah; eleven grandchildren, Kelsey Weaver, and her husband, Dustyn, Kaitlin Boyd, (Malcolm), Emily Braun (Caleb), Katie Mueller, Lyndi Blanton, and her husband, Robert, Heaven Baker, and her husband, Cody, Kaitlyn Finigan, and her husband, Matthew, Wade Madden, Kayla Baker, Dakota Baker, and his wife, Keilie, and Anna Baker; seven great-grandchildren, Lincoln, Harrison, Emi, Bailey, Berkley, Makenna and Grant; a brother, Ronnie Pierce, and his wife, Judy, of Lebanon, Missouri; a sister, Judy Armstrong, of Lebanon, Missouri; as well as a host of other relatives and many friends. He lived his entire life in Laclede County, and graduated from Lebanon High School in the Class of 1967. Gary worked for the H. D. Lee Company for awhile and then began working for Associated Grocers for thirty years before retiring. He was a member of Teamsters Union # 245. Gary was raised in the Crossroads Freewill Baptist Church. In his spare time he enjoyed being outdoors where his favorite activities were hunting, fishing, and camping. He was always willing to help and give a helping hand. His life rotated around his family and he especially enjoyed having time with his grandchildren and great-grandchildren. Gary was a loving husband, father, grandfather, great-grandfather, and was a caring friend. We celebrate his life and know that his family and friends will hold tight to the wonderful memories he made for them during his lifetime.

The family of Gary Pierce (Lebanon) created this Life Tributes page to make it easy to share your memories.