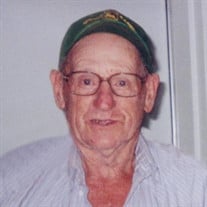 George Lee Inman, Sr., son of Willis and Mildred Bogger Inman, was born June 29, 1934, in Chatsworth, New Jersey. He departed this life Thursday, February 17, 2022, in Mercy Hospital, in Springfield, Missouri, at the age of eighty-seven years, seven months, and five days. On November 16, 1958, he was united in marriage to Mildred Lucille Jones, and to this union one daughter and two sons were born. He was preceded in death by his parents; his wife, Lucille; an infant daughter, Pamela Ruth Inman; a great-granddaughter, Isbell; two brothers, Willis “Sonny” Inman, Jr., and Nate Inman; three sisters, Ann Sloan, Efie Seaman, and Betty Defestano; a brother-in-law, Wayne Jones; and a sister-in-law, Ruth Jones. George is survived by two sons, George Lee Inman, Jr., and his wife, Teresa, and Gary Eugene Inman, and his wife Pamela, all of Lebanon, Missouri; four grandchildren, Thomas Inman, and his wife, Summer, Michelle Isbell, and her husband, John, Timothy Inman, and his wife, Stacia, and James Inman, and his wife, Kristen; nine great-grandchildren, John Jacob and Zander Lee Isbell, Trevor George, Willis Jack, Jake Thomas, Trent Wayne, Lola Belle Inman, Gabriel Michael Isbell, and Sierra Jean Inman; two sisters, Mary Eldurp, of Pensacola, Florida, and June Collins, and her husband, Jack, of South Seaville, New Jersey; and a brother-in-law, Paul Jones, of Grovespring, Missouri; several nieces and nephews; as well as a host of other relatives and friends. He was born and raised in Chatsworth, New Jersey. After graduating from high school, he entered the military and served his country faithfully in the United States Army. He and Lucille then spent fourteen years residing in New Jersey. Upon moving back to Missouri, George worked for the L. E. Meyers Highline Company, Marathon Electric, and retired from the Independent Stave Company. George professed his faith in Christ at a Mt. Zion (Cuba) Freewill Baptist Church revival, and he and Lucille became members and attended there for many years until their health began to fail. He was an avid deer hunter and loved the outdoors. He had a great passion for fishing and gigging. George and Lucille loved to make trips back to New Jersey every summer to see family. In his spare time from his church and family gatherings, he enjoyed raising blueberries, or playing a good game of dominos with neighbors and friends. There was nothing he enjoyed more than being with his grandkids and great-grandkids. George was a loving husband, father, grandfather, great-grandfather, brother, uncle, and was a caring neighbor and friend. We celebrate his life and know that his family and friends will cherish the wonderful memories he made for them over the last eighty-seven years. Visitation will be Sunday afternoon, Feb. 20, from 2- 4 p.m. at Holman-Howe Funeral Home. Funeral services with Craig Perry officiating, will be Monday, Feb. 21 at 10 a.m. at Holman-Howe Funeral Home. Burial will follow in Mt. Zion (Cuba) Cemetery. Arrangements are under the direction of Holman-Howe Funeral Home of Lebanon, Missouri.

The family of George L. Inman, Sr. (Lebanon) created this Life Tributes page to make it easy to share your memories.