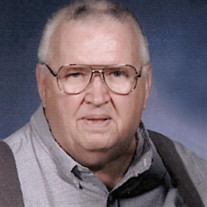 George Edward Truitt, son of E C and Eva Faye Buttram Truitt, was born December 26, 1942, in Lebanon, Missouri. He departed this life Sunday, January 16, 2022, in Mercy Hospital, in Springfield, Missouri, at the age of seventy-nine years, and twenty-one days. On August 4, 1962, he was united in marriage to Judy Kay Phillips and to this union three sons were born. He was preceded in death by his parents; a son, Robert Duane Truitt; and a sister, Mary Truitt Gaines. George is survived by his loving wife, Judy, of the home near Lebanon, Missouri; two sons, Jeff Truitt, and his wife, Shelly, of Cave Springs, Arkansas, and Mark Truitt, and his wife, Jessica, of Lebanon, Missouri; four grandchildren, A. J., Casey, Nicole, and Jennifer; a great-grandson, Augie Truitt; as well as a host of other relatives and friends. He was raised in the Kansas City, Missouri area, and then made his home in the Lebanon area for most of his adult years. He owned and operated the DX Station in Phillipsburg, and then worked as a truck driver for several years. George was a longtime active member of Second Baptist Church in Lebanon. In his spare time he enjoyed fishing, watching NASCAR, looking at Classic Cars. George was an active drag racer and raced in the Springfield area. George loved to spend time customizing and working on cars. He also liked collecting tools and knives. He enjoyed caring for animals and had a special love of his dogs. His life rotated around his family and he especially enjoyed time with his grandchildren. George was a loving husband, father, grandfather, great-grandfather, and was a caring friend. George was a devoted husband to his wife, Judy. He has gone above and beyond caring for her for the last ten years. George and his sweet wife, Judy, also found satisfaction and solace in bird watching. The time they spent watching God's creation was time so very treasured. We celebrate his life and know that his family and friends will hold tight to the wonderful memories he made for them during his lifetime. Funeral services will be held Wednesday, January 19, 2022 at 10 a.m. at Holman-Howe Funeral Home, officiated by Rev. Bill Garrett. Burial will follow in Mount Rose Memorial Park. Friends may call at their convenience. A memorial has been established to the American Kidney Association and donations may be left at the funeral home.

The family of George E. Truitt (Lebanon) created this Life Tributes page to make it easy to share your memories.