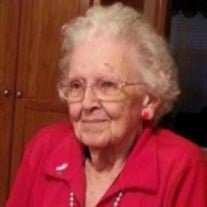 Geraldine “Gerry” Lillian Lober, 99, of Raymore, Missouri passed away on August 18, 2021 at the Foxwood Springs Health Care Center. She was born September 30, 1921 in Olathe, Kansas to Bert Spencer and Lillian Musselman Spencer. Due to the passing of her mother shortly after her birth, she was raised by her maternal grandparents, Robert Joseph Musselman and Nellie Nawgel Musselman. Gerry graduated from St. John Memorial High School in Olathe. Gerry was united in marriage to Bernard William Lober on September 26, 1947 in Kansas City, Missouri. She lived in the Kansas City area until her retirement from Ben Franklin in 1976. At that time she and Bernard move to rural Polk County, Missouri and then to Bolivar in 1978. While in Bolivar, Gerry was an active member in the Over 50 club and a member of First Baptist Church. In 2000 she moved back to the Kansas City area to be near family. Gerry was a devoted wife, mother and grandmother and will be greatly missed. She loved spending time with her family. She also enjoyed doing a variety of crafts, singing, working jigsaw puzzles and reading. She was preceded in death by her husband, Bernard W. Lober; her son Steven W. Lober; her daughter-in-law, Karen S. Lober; her great granddaughter, Emilyn K. Basnett; and by her three brothers. Gerry is survived by her son, Greg Lober and his wife Donna of Liberty, MO; daughter, Sandy Rix of Raymore, MO; daughter-in-law, Linda Lober of Pittsburg, MO; granddaughters, Missy Basnett (Dan) of Taichung, Taiwan, Kari (Marlen) McCoy of Kansas City, MO, Angela (Daniel) Smith of Ferrelview, MO; grandson, Jeff Rix of Austin, TX; and great grandchildren, Dalton Basnett, Gracen Basnett, Miles McCoy, Karli McCoy, Cayden Rix, Easton Rix, and Paxton Rix. Private graveside services will be held at the Greenwood Cemetery in Bolivar, MO at a date and time to be determined. In lieu of flowers, a memorial donation may be sent to the Alzheimer’s Association, P.O. Box 96011, Washington, DC 20090-6011. To send flowers or a memorial gift to the family of Geraldine Lober please visit our Sympathy Store.

The family of Geraldine Lober (Bolivar) created this Life Tributes page to make it easy to share your memories.