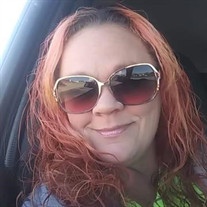 Glennis Marie Stewart, daughter of John and Evelyn Bohannon Leach, was born August 27, 1969, in Lebanon, Missouri. She departed this life Wednesday, September 1, 2021, in her home, in Lebanon, Missouri, at the age of fifty-two years, and five days. She is survived by two daughters, Morgan Meddaugh, of Clarksville, Tennessee, and Isabella Stewart, of Lebanon, Missouri; two sons, Justin Stewart of Lebanon, Missouri, and Mickey Stewart, of Jefferson City, Missouri; a grandson, Ethan; her mother, Evelyn Leach, of Lebanon, Missouri; her father, John Leach, of Monroe, Louisiana; a brother, James Leach, of Apache Junction, Arizona; two sisters, Becky Greek, of Lebanon, Missouri and Joni Leach Kicklighter of West Monroe, LA.; several nieces and nephews; as well as a host of other relatives and friends. Glennis was born and raised in the Lebanon area and graduated from Lebanon High School. She was a devoted homemaker to her family and also worked as a waitress throughout her life, until becoming disabled. She rotated her life around her family and liked spending time with her children and grandchild. She also enjoyed gambling in her spare time. She had a delightful sense of humor and could be a little bit crazy. Glennis was a loving mother, grandmother, daughter, sister, aunt, and was a caring friend. We celebrate her life and know that her family and friends will hold tight to the wonderful memories she created for them during her lifetime. Funeral services will be Tuesday, Sept. 7 at 11 a.m. at Holman-Howe Funeral Home of Lebanon. Visitation will be held Monday evening at the funeral home from 6 - 7:30 p.m. Burial will be in Lebanon Cemetery. A memorial had been established.

Glennis Marie Stewart, daughter of John and Evelyn Bohannon Leach, was born August 27, 1969, in Lebanon, Missouri. She departed this life Wednesday, September 1, 2021, in her home, in Lebanon, Missouri, at the age of fifty-two years, and five... View Obituary & Service Information

The family of Glennis Marie Stewart (Lebanon) created this Life Tributes page to make it easy to share your memories.