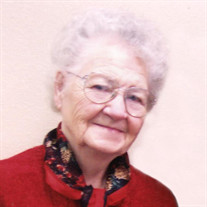 Goldie Florene Lewis, daughter of Harrison Square and Stella Mae Rogers Black, was born April 27, 1923, in Lebanon, Missouri. She departed this life Saturday, November 27, 2021, in Wilson’s Creek Nursing and Rehabilitation Center, in Springfield, Missouri, at the age of ninety-eight years, and seven months. Early in her life she was united in marriage to Noah Don Hunt, and to this union four children were born. After Noah’s passing, she later married Arlis Lewis and they shared several years of happiness and memories. She was also preceded in death by her parents; two sons, Jimmy Don and Larry Don Hunt; and three sisters, Alice Armstrong, Gladys Virginia Pope, and Virginia May Jackson. Goldie is survived by a daughter, Paula Myers, and her husband, Larry G., of Springfield, Missouri, and Danny Hunt, and his wife, Connie, of Strafford, Missouri; nine grandchildren; twenty-one great-grandchildren; six great-great-grandchildren; several nieces and nephews; as well as a host of other relatives and friends. She was raised in a one room shack near Stoutland, Missouri, and grew up in hard conditions. After she and Don were married, they made their home, near Lebanon and began raising their family. Besides being a devoted homemaker to her husband and family, Goldie also worked for the H. D. Lee Company for twenty years. She moved to Springfield, Missouri in 1975 after a house fire. Goldie enjoyed attending Trinity Pentecostal Church and followed the Pentecostal faith throughout her life. During her early married years, she enjoyed having a big garden that she plowed with her horse. She liked fishing, crocheting, sewing, and also made quilts. Her family was very important to her and she especially enjoyed having time with all of her grandchildren. Goldie was a loving mother, grandmother, great-grandmother, great-great-grandmother, aunt, and was a caring friend. We celebrate her life and know that her family and friends will hold tight to the wonderful memories she created for them during ninety-eight years. A memorial to Trinity Pentecostal Church has been established and contributions may be made through the funeral home.

The family of Goldie F. Lewis (Lebanon) created this Life Tributes page to make it easy to share your memories.