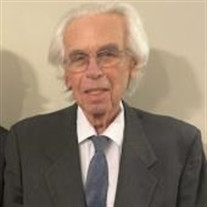 Gordon Edwin Matz, son of Anton and Pauline (Dahlman) Matz, was born January 19, 1939 in Chicago, Illinois. He departed this life Friday, April 15, 2022 in Ozark Rehabilitation and Care Center at the age of eighty-three years, two months, and twenty-seven days. On September 26, 1959, Gordon was united in marriage to Marleen Davis and to this union three children were born. Gordon was preceded in death by his parents; his wife, Marleen Matz; a brother Roger “Dale” Matz; and his son-in-law, Vaqar Sheriff. He is survived by his children, Kevin Matz and wife Brenna, of Columbia, Missouri, Linda Sheriff, of Camdenton, Missouri, and Brian Matz and wife Joey, of Itasca, Illinois; his grandchildren, Kamran, Khalid, Dakota, Miko, Regan, Malikye, Brian, and Jayden; his nephews, Steven, Richard, Robert, and David Matz; as well as a host of other relatives and friends. He was a member of Our Lady of the Wayside Catholic Church in Arlington Heights, Illinois for many years. Gordon grew up in the Chicago suburbs of Illinois and was a graduate of Leyden High School. Following his graduation from high school, Gordon proudly served his country in the National Guard and worked as a Tool and Die Maker. Gordon and Marleen raised their children in the Arlington Heights area and he was very active in his children’s various activities. He served as the president of the Band Boosters while his children were in high school. Gordon spent numerous years working as a Public Safety Officer at Alexian Brothers. He later worked as a bus driver in Illinois and continued to do so after moving to Camdenton in 2005. Gordon always liked to stay busy working on various things and would tinker on anything that needed to be fixed. He also enjoyed playing solitaire on the computer and listening to Jazz music. Gordon was a loving father, grandfather, and uncle. We celebrate his life and accomplishments and will treasure the many wonderful memories he has created for his family and friends. Funeral services will be held at 4:00 pm Saturday, April 23, 2022 in the Allee-Holman-Howe Funeral Home, Camdenton, Missouri. Visitation will be held from 2:00-4:00 pm Saturday in the funeral home. Memorial donations may be made to the American Cancer Society in care of the funeral home at 15 Clint Avenue, Camdenton, Missouri 65020. The family requests that anyone who wishes to join them following the services can meet at The Camelot Lodge at 457 Merlin Drive, Camdenton, Missouri 65020. To send flowers to the family or plant a tree in memory of Gordon, please visit our floral store.

The family of Gordon E. Matz (Camdenton) created this Life Tributes page to make it easy to share your memories.