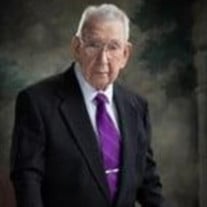 Harlie Kay Gallatin, 87, of Bolivar, Missouri, entered into joy Monday, August 16, 2021, at Mercy Hospital in Springfield, Missouri. Harlie was born December 15, 1933, on the family farm near Meadville, Missouri. The second son of Harlie Campbell Gallatin and Gladys Louise (Warren) Gallatin. Harlie was raised in the church and in 1945 he accepted Christ and about two years later made a public commitment to full-time Christian service. In May, 1951 he graduated from Meadville High school and enrolled at Hannibal-LaGrange College. While a student at Hannibal-LaGrange, he served as song leader at Immanuel Baptist Church, Hannibal, and was licensed to the ministry there in July of 1952. On March 28, 1954, he was ordained as a Gospel Minister by Mt. Olive Church, Linn County MO. As a young man, Harlie pastored several small churches and continued to fill interim pulpits and supply preach as he pursued his education. Harlie Kay began his advanced studies by completing his A.A. Degree in Social Studies with Language Studies in Koine Greek from Hannibal-LaGrange in 1953. He earned his A.B. Degree in Modern History, Psychology, Philosophy with Language Study in German, from William Jewell College, Liberty, Missouri, in 1955, and his Bachelor of Divinity, Biblical Philology (Koine Greek, Hebrew & Aramaic), Historical & Archeological Studies from Central Baptist Theological Seminary, Kansas City, Kansas, in 1959. In 1961 he earned an M.A. in History: Modern Europe and United States with Language Studies in Latin & French, from The University of Central Missouri, Warrensburg. In 1972, Dr. Gallatin completed his Ph.D., in Ancient & Medieval History, from the University of Illinois at Urbana-Champaign. While at Hannibal-LaGrange in 1952, Harlie met, as he would say, “the young lady who would one day be my wife,” Nancy Mae Morgan. They were united in marriage on August 5, 1954 and began a wonderful 67 year journey together. In 1961 Harlie and Nancy moved their three small children to Bolivar, Missouri, where Harlie began a 40 year career with Southwest Baptist University (then Southwest Baptist College) in the History and Political Science Department. He served as Chair of that Department, from 1970 until his retirement in 2001. Harlie Kay served in various other positions during his tenure at SBU and continued to adjunct for several years following his retirement. It was in the early 80's that he graduated from the typewriter to the computer. He purchased his first personal computer in 1984. He taught himself hypertext markup language (html) and over the years built a cluster of web pages for the University. Outside the classroom he was a man of few words but his words were always well thought-out, insightful and significant to those who knew him. He had a deep love for education and a pursuit of expanding knowledge through exploration and questioning. In addition to his service at the university, Harlie enjoyed years of leading a Men's Sunday School Class at First Baptist Church. He had the remarkable ability of creating that safe space in his home and classroom where a person could ask questions and grow in understanding and knowledge. Guided by his committed faith to the Lord of love, grace and mercy, Harlie was all about pointing others to God who has revealed Himself to us though the Bible and though His Son, Jesus Christ. Clearly, Harlie lived out his favorite scripture verse found in 2 Timothy 2:15. “Study to show yourself to God as one approved, a worker who does not need to be ashamed, rightly dividing the word of truth.” Harlie was a truly devoted husband and father, adored and highly respected by his wife and children. Their home life was filled with lively, open conversation. Meal times often stretched into lengthy discussions or erupted into joyful storytelling and teachable moments. He often told his children “Nothing is a waste of time. You can learn something from every experience.” They saw him model the life of Christ. Harlie will be remembered by his family for his insight, his wisdom, and his gentle spirit; his commitment to God and the study of His Word; and by his heartfelt prayers at the dinner table, which few others had the wonderful privilege of experiencing. He will be sorely missed. Harlie was preceded in death by his parents and infant brother Warren Dean Gallatin. He is survived by his wife Nancy, two daughters Kaylene (Gallatin) Cox and husband J. Mark Cox of San Antonio, Texas, and Rhonda (Gallatin) Proffitt of Owasso, Oklahoma, and one son Morgan Dean Gallatin of Bolivar; four grandchildren, Andrew Cox and wife Kendall, Alyssa (Cox) Leal and husband Luis, R. Aaron Cox and wife Chelsea, and Issac D. Proffitt; and four great grandchildren, Cole and Harper Cox, Esai Leal and Cohen Cox. A Memorial Service will be held grave side on Sat. August 21, 2021 at 10:00 am at Greenwood Cemetery, Bolivar Missouri. In lieu of flowers the family requests donations be made to either of the following. • The Harlie Gallatin Memorial Fund at SBU. This endowment was established by Dr. Harlie Gallatin as Senior Professor Emeritus of History to provide annual funding to purchase history books that support student learning through courses taught by the Department of History and Social Sciences. (https://advance.sbuniv.edu/give) • First Baptist Church, Bolivar, MO Harlie is available for viewing from 8:00 AM to 5:00 P.M. at Butler Funeral Home. Graveside services will be at 10:00 AM, Saturday, August 21, 2021, at Greenwood Cemetery, Bolivar, Missouri. To send flowers or a memorial gift to the family of Harlie Kay Gallatin please visit our Sympathy Store.

The family of Harlie Kay Gallatin (Bolivar) created this Life Tributes page to make it easy to share your memories.