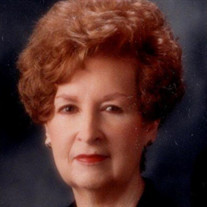 Hazel Nadine England, daughter of Troy and Mary Vaughn Dampier, was born December 1, 1931, near Lebanon, Missouri. She entered into her heavenly home on Monday, June 14, 2021, in her home, in Lebanon, Missouri, at the age of eighty-nine years, six months, and thirteen days. On February 17, 1951, she was united in marriage to William “Bill” England and to this union one son was born. She was preceded in death by her parents; and five brothers, Charles, Bill, L.D., Troy, Jr., and Roy Dampier. Hazel is survived by her loving husband of seventy years, Rev. Bill, of the home; a son, Doug England, and his wife, Diana, of Lebanon, Missouri; two grandchildren, Nathan England, and his wife, Kendra, and Alissa Jones; three great-grandchildren, Graydon and Garrett England, and Cason Jones; two brothers, Joe Dampier, and his wife, Joyce, and Gary Dampier, all of Lebanon, Missouri; four sisters, Opal Green, Wilma Ivey, and her husband, Wib, Kay Zeigenbein, all of Lebanon, Missouri, and Linda Newkirk, and her husband, Larry, of Florence, Alabama; a number of nieces and nephews; as well as a host of other relatives and many friends. She lived her entire life in Laclede County and Lebanon, and graduated from Lebanon High School in the Class of 1949. She then worked at Stock and Clements Dry Goods and later at Radar Pontiac Dealership for a few years. After she and Bill were married, they made their home in Lebanon and lovingly raised their son. Hazel was always a devoted homemaker to her husband and family, and also was employed as the corporate secretary for Detroit Tool Company for forty-one years. She was a dedicated minister’s wife and was very supportive of her husband in his ministry. Hazel made her profession of faith early in her life and was a longtime, active member of Garfield Avenue Church of God through the years. Hazel raised her two youngest sisters, Kay and Linda, following the passing of their mother. She was an excellent cook and baker and was particularly known for her fruit pies, red velvet cake, and fried chicken. She was always gracious and was tasteful and elegant in her dress. She centered her life around her family and liked spoiling her grandchildren and great-grandchildren. Hazel was a loving wife, mother, grandmother, great-grandmother, sister, aunt, and was a caring neighbor and friend. We celebrate her life and know that she will be forever remembered for her sweet words, beautiful smile, and loving ways. She will be greatly missed by all those who knew and loved her. Services for Hazel England are 2:00 p.m. Monday, June 21, 2021, in Holman-Howe Funeral Home with Benny Lemry and Ron Dunlap officiating. Visitation will be from 3:00 - 5:00 p.m. Sunday in the funeral home. Burial will be in Mount Rose Memorial Park under the direction of Holman-Howe Funeral Home of Lebanon, Missouri. Memorial donations to Garfield Avenue Church of God may be made through the funeral home.

Hazel Nadine England, daughter of Troy and Mary Vaughn Dampier, was born December 1, 1931, near Lebanon, Missouri. She entered into her heavenly home on Monday, June 14, 2021, in her home, in Lebanon, Missouri, at the age of eighty-nine... View Obituary & Service Information

The family of Hazel N. England (Lebanon) created this Life Tributes page to make it easy to share your memories.