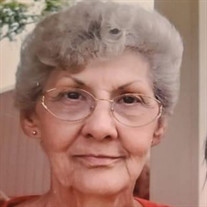 Helen Bernice Creason, daughter of J. P. “Pete” and Gertrude Bradford Cochran, was born February 12, 1937, in London, Arkansas. She departed this life Friday, April 8, 2022, in Springfield, Missouri, at the age of eighty-five years, one month, and twenty-six days. Early in her life she was united in marriage to James E. Flowers, and to this union two daughters and two sons were born. Later in life, Helen married Raymond L. Creason, and they shared over 20 years of marriage before his passing. She was also preceded in death by her parents; an infant son, James Dennis Flowers; a brother, Ivan Cochran; and four sisters, Mabel Strecker, Bonnie Livesay, Wanda James, and an infant, Margaret Cochran. Helen is survived by two daughters, Lisa Brayman and Carla Barnes, both of Lebanon, Missouri; a son, Ricky Lee Flowers, of Springfield, Missouri; nine grandchildren; fifteen great-grandchildren; three brothers, Marvin Cochran, and his wife, Judy, of Lebanon, Missouri, Melvin Cochran, and his wife Wanda, of Bloomfield, Missouri, and Steve Cochran, and his wife, Linda, of Scott City, Missouri; a sister, Pauline McMillian, and her husband, Denver, of Dexter, Missouri; several nieces and nephews; a number of cousins; and many friends. She was born and raised in Arkansas. She then lived in Arbor Hills, Cape Girardeau, Kansas City, and St. Louis, Missouri before moving to Lebanon in the early 1970’s. In addition to being a devoted homemaker to her family, she also worked for the H. D. Lee Company for several years. Helen followed the Baptist faith throughout the years. She enjoyed gardening, particularly growing beautiful roses, and liked going to garage sales. Her family was central in her life and she especially enjoyed having time with her grandchildren and great-grandchildren. Helen was a loving mother, grandmother, great-grandmother, sister, aunt, and was a caring friend. We celebrate her life and know that her family and friends will cherish the wonderful memories she created for them during her lifetime.

The family of Helen B. Creason (Lebanon) created this Life Tributes page to make it easy to share your memories.