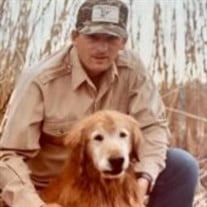 Henry J. Lutcher Stark II, 71, passed away unexpectedly August 30, 2021 in Linn Creek, Missouri after suffering a pulmonary embolism. Born April 20, 1950 to Becky and Homer Stark in Orange, Texas, he was a 1968 graduate of Stark High School and graduated with a degree in Wildlife Management and Forestry from Texas A&M University in College Station, Texas. From childhood, Lutcher had a love for everything concerning wildlife and enjoyed spending time outdoors whether it was hunting, fishing, or a round of golf. His favorite stories to share centered around a once in a lifetime trip to Africa with his dad. He also devoted a lot of time restoring old family movies dating back to the 1920s, digitizing them and adding his own flair with music while sharing them with family and friends online. Lutcher brought great memories of a simpler time to many and received hundreds of requests for more from family and friends. After years of managing a fishing lodge in Alaska and ranches in Texas and Colorado, he moved to Missouri and focused on something he always loved: working with children. Retirement allowed him to drive a bus for the Camdenton School District where he was able to interact with many children over the years. He found pure enjoyment seeing the smiles of children as they played video games he bought to share with them on the bus routes. Little did they know, that was the secret to keeping them in their seats. Lutcher was preceded in death by his parents, Homer and Becky Stark, and is survived by his three sisters Rebecca Nugent of Bryan TX, Ramona Sands of Dallas TX, and Rebel Falcone of Indian Land, South Carolina. He is also survived by several nieces and nephews: Michael Nugent and family, College Station TX; Patrick Nugent and family, Dallas TX; Rebecca Falcone Rouse and family, Charlotte, NC; William Falcone of Indian Land, SC; Haven Sands Heinrichs and family, Boulder CO; Jacob Sands and family, Wichita KS; and Stark Sands and family, New York. Since dogs — especially golden retrievers — were always a special part of Lutcher’s life, the family would appreciate donations in Lutcher’s memory to your favorite dog rescue group. The Stark sisters and their families greatly appreciate all who encouraged, cared for and loved our brother throughout his lifetime. A memorial ceremony was held in Camdenton MO by friends and co-workers. A lifelong Aggie fan, we know he will be watching his favorite team and band from a front row seat next to our dad. Gig ‘em! Special thanks to Allee Holman Howe Funeral Home in Camdenton, Missouri for providing services for the family. Arrangements are under the direction of Allee-Holman-Howe Funeral Home and are incomplete at this time. To send flowers to the family or plant a tree in memory of Henry Jacob Lutcher Stark II please visit our Tribute Store.

The family of Henry Jacob Lutcher Stark, II (Camdenton) created this Life Tributes page to make it easy to share your memories.