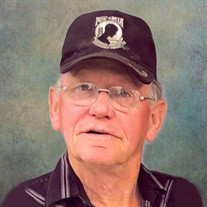 Howard Murrel Williams, son of Elva and Cleda Nunn Williams, was born May 9, 1947, near Competition, Missouri. He departed this life Saturday, July 31, 2021, in Mercy Hospital, in Lebanon, Missouri, at the age of seventy-four years, two months, and twenty-two days. On March 6, 1971, he was united in marriage to Kathy Colene Caudle, and to this union three daughters and two sons were born. He was preceded in death by his parents; a daughter, Kathy Janene Williams; four brothers, Lavern, Woodrow, Bill and Bob Williams; two sisters, Edna Williams, and Katherine Zimmerman; and a special friend, David Wood. Howard is survived by his loving wife of fifty years, Kathy, of the home; two daughters, Jessica Petary, and her husband, Jesse, of Lebanon, Missouri, and Mary Polson, and her husband, Ken, of Baxter Springs, Kansas; two sons, Murrel Williams, of the home, and Howard Craig Williams, and his wife, Amanda, of St. Robert, Missouri; seventeen grandchildren; eight great-grandchildren; two brothers, Edward Williams, and his wife, Edna, and Johnny Williams, and his wife, Barbara, all of Lebanon, Missouri; a sister, Bessie Ellis, of Lebanon, Missouri; several nieces and nephews; as well as a host of other relatives and friends. He was born and raised in the Competition and Lebanon area and attended Lebanon R-III Schools. He joined the military as a young man, and served his country faithfully from 1966 until 1968, during the Vietnam War. After being honorably discharged from the Army, he returned home and began working for Huntington Laboratories in Indiana for a time. He soon returned to Lebanon and he and Kathy were married. They made their home near Richland and lovingly raised their children. Howard worked at various jobs for a time before beginning a career as a truck driver. He was employed by several different companies over the years. He enjoyed being outdoors where his favorite activities were hunting and fishing. He possessed a great sense of humor and liked to give everyone a hard time. He loved his family dearly and especially enjoyed having time with his grandchildren and great-grandchildren. Howard was a loving husband, father, grandfather, great-grandfather, brother, uncle and was a caring neighbor and friend. We celebrate his life and know that his family and friends will hold tight to the wonderful memories he made for them during his lifetime. Graveside services for Howard Williams will be Saturday, Aug. 7 at 10 a.m. at Crossroads Cemetery in Lebanon with Full Military Honors. Visitation will be held Friday evening from 5 - 6:30 p.m. at Holman-Howe Funeral Home in Lebanon. A memorial has been established to Crossroads Cemetery and donations may be left at the funeral home.

Howard Murrel Williams, son of Elva and Cleda Nunn Williams, was born May 9, 1947, near Competition, Missouri. He departed this life Saturday, July 31, 2021, in Mercy Hospital, in Lebanon, Missouri, at the age of seventy-four years, two months,... View Obituary & Service Information

The family of Howard M Williams (Lebanon) created this Life Tributes page to make it easy to share your memories.