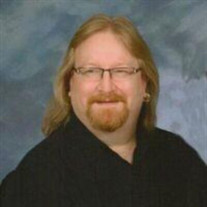 Tuesday, April 13, 2021, was the day the music died for Gavin Mack, and became very silent for all who loved him. He was 62 years young. Gavin grew up in Springfield, Missouri, but Carlsbad, New Mexico, had been his home for many years. He was born in Wichita, Kansas, on January 27, 1959. It was a day that God knew the world needed a funny, smart, musical, giving and loving person. His parents, Jim and Joan Mack, could not have been any happier than when they finally got to hold their adorable, strawberry blonde headed boy. Gavin was shy in his younger years. He overcame that through music and public speaking. He took his church to many wins in Bible competitions. He never forgot any book, movie, director or author that he enjoyed. He could remember details that would keep you entertained for hours. Smart. That was an understatement! In high school, Gavin had a chemistry teacher that took his planning period to teach two students, one being Gavin. This teacher saw so much interest and curiosity in these young minds. During that time, Gavin was also a Medical Explorer Scout. He became an Eagle Scout at the age of 16. For his Eagle project, he completely updated the cataloguing system at the Brentwood Library. Gavin graduated from Drury College (at that time) with degrees in chemistry, biology, and a minor in psychology. He later received his MBA from Baker University. Following a professional career path and several moves throughout the country, including Lawrence, Kansas, and Exeter, New Hampshire, Gavin made a major life change and moved to Carlsbad where, for several years, he fulfilled what was perhaps his most important calling, that of full time “Super Dad”. During this period of life, he could be found coaching soccer, chaperoning school field trips, and being a continually active member of Sunset School PTA. He provided care, wise counsel, and rides for the children he knew and loved. Boy did he love the St. Louis Cardinals. His crazy dog is even named Yadi. He had a Cardinal Christmas tree every year. Gavin could play anything that had strings. He played beautiful violin in orchestra and guitar or bass in band. He toured Europe with the Glendale Jazz Band, bringing joy to so many. He could make a piano sing. He had perfect pitch. He was the Worship Leader at First United Methodist Church for many years and under his leadership the contemporary worship service grew like crazy! He also played in a few bands just for fun and most recently enjoyed playing at Central Christian Church. Gavin substituted in middle school and high school for many years. In 2016, he began teaching full time at Carlsbad Early College High School. He was the advisor for the Business Professionals of America chapter where he coached and prepared students for state and national competitions. Gavin and his BPA students did many community service activities. He helped many students with credit recovery so they could graduate on time. Always giving of himself. He was preceded in death by his parents, James Lea and Betty Joan (Smith) Mack. Gavin is survived by his wife Mary, of Carlsbad, his son Nick Stucky-Mack and wife Stephanie Kim of Los Angeles, California, bonus son Ray (RJ) Tavarez and fiancé Valaria Garcia of Albuquerque, New Mexico, and bonus daughter Latisha Locken and husband Brent of Long Beach, California. A sister Joyce Fenner and her husband Gary of Fordland, Missouri, his favorite Aunt Kay Spiva and her husband Win, and many cousins, nieces, and nephews. He is also preceded in death by biological father Ed Blackwell, and maternal siblings, Beth Harris, and Frank Brownlee. His birth mother Kay (John) Sandor, maternal siblings, Mark (Tanya) Buck, Deborah (Russell Donnelly) Perrine, Doug (Tina) Cozine, and fraternal siblings, Mike (Bridgette) Blackwell, and Dee Ann Milburn, as well as their mother Mary Ann Blackwell, also survive. Donations may be made to Business and Professionals of America Carlsbad Early College High School in Gavin's Memory.

Tuesday, April 13, 2021, was the day the music died for Gavin Mack, and became very silent for all who loved him. He was 62 years young. Gavin grew up in Springfield, Missouri, but Carlsbad, New Mexico, had been his home for many years. He was... View Obituary & Service Information

The family of J. Gavin Mack (Seymour) created this Life Tributes page to make it easy to share your memories.