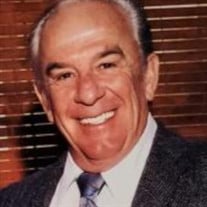 Jackie Eugene Anderson, son of Basil and Marguerite Anderson, was born, September 20, 1938 in Callao, Missouri. He departed this life, April 11, 2022, at the age of eighty-three years, seven months and twenty-two days. He was preceded in death by his father and mother, Basil and Marguerite; and his brother Jim Anderson. Survivors include; significant other, Gloria Collins of Camdenton, Missouri; son, J.L. Anderson and wife Joy of Springfield, Missouri; daughter, Vicki Blalock and husband Greg of Olathe Kansas; grandchildren, Savannah Bolin and husband Craig of Walnut Grove, Missouri, Candis Pannell and husband Jared of Olathe, Kansas, Alexander, Veronica and Maria Blalock of Olathe, Kansas, ; great-grandchildren, Raylon and Presley Bolin of Walnut Grove, Missouri, Lydia and Charlotte Pannell of Olathe, Kansas; brothers, Dale Anderson and wife Sharon of Emporia, Kansas, Donald Anderson of Yuma, Arizona, and Lester Anderson of Laurie, Missouri; sister, Gladys Breedlove and husband Norman of Smithville, Missouri and a host of many nieces, nephews, other relatives and many friends. Jack was a God loving partner, father, and friend. He would give the shirt off his back if he saw anyone in need. In Jacks free time, he loved the lake whether it was fishing, floating or boating. He also liked sharing his talents in building, carving, and creating something from little or nothing. He was “a Jack” of all trades.” He also shared his love for guns by shooting, carving, and trading them. There are not enough words to describe our father, other than “we were blessed to have called him Dad”. We celebrate his life and his accomplishments and will treasure the memories he created for his family and friends. Arrangements are under the direction of Allee-Holman-Howe Funeral Home of Camdenton, Missouri. To send flowers to the family or plant a tree in memory of Jack, please visit our floral store.

Jackie Eugene Anderson, son of Basil and Marguerite Anderson, was born, September 20, 1938 in Callao, Missouri. He departed this life, April 11, 2022, at the age of eighty-three years, seven months and twenty-two days. He was preceded in death... View Obituary & Service Information

The family of Jack Anderson (Camdenton) created this Life Tributes page to make it easy to share your memories.