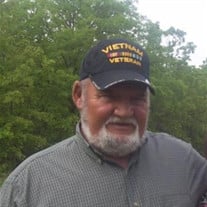 Jackie Lee Hill, son of Farrell and Bonnie Nutter Hill, was born June 27, 1948, near Lebanon, Missouri. He departed this life Sunday, July 18, 2021, in Cox South Medical Center, in Springfield, Missouri, at the age of seventy-three years, and twenty-one days. On November 9, 1979, he was united in marriage to Susie May Huckaby, and they shared the last forty-one years. He was preceded in death by his parents; a daughter, Patty Rogers; two sons, Ricky Moad, and Gary Peterson; and a brother, Archie Hill. Jackie is survived by his loving wife, Suzie, of the home; three daughters, Marilee Smalley, and her husband, Francis, of Eldridge, Missouri, Stephanie German, and her husband, William, of Kansas City, Missouri, and Joyce Baker, and her husband, Curtis, of Lebanon, Missouri; two sons, Randy Hood, and his wife, Brenda, and Ron Peterson, and his wife, Felicia, all of Lebanon, Missouri; fifteen grandchildren; fifteen great-grandchildren; a brother, Dennis Hill, of Fordland, Missouri; a sister, Judy Wolken, of Fordland, Missouri; several nieces and nephews; as well as a host of other relatives and friends. He was raised in the Stoutland community, and graduated from Stoutland High School. He entered the military as a young man and served his country faithfully in the United States Navy during the Vietnam War. He was placed on a mind sweeper for a time and then later served on the U.S.S. Constitution. After serving for twelve years, he was honorably discharged and made his home in the Lebanon area. He worked for the City of Lebanon Electric Department for a number of years before retiring. He was a member of the Lebanon V.F.W. Post # 4107. In his spare time he enjoyed fly fishing and “Noodling”. He also liked Bluegrass music. His family was very important to him and he especially enjoyed having time with his grandchildren and great-grandchildren. Jackie was a loving husband, father, grandfather, great-grandfather, great-great-grandfather, brother, uncle, and was a caring friend. We celebrate his life and know that his family and friends will hold tight to the wonderful memories he made for them during his lifetime. Service with Full Military Honors for Jackie Hill will be 2:00 p.m. Thursday, July 22, 2021, in Holman-Howe Funeral Home of Lebanon, Missouri. Burial will be private in Idumea Cemetery, near Laquey, Missouri.

The family of Jackie Hill (Lebanon) created this Life Tributes page to make it easy to share your memories.