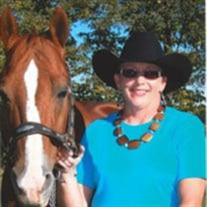 Jacqueline “Jackie” Charlene Poole, daughter of the late L. D. and Charlotte (Everetts) Dampier was born on July 15, 1961 in Lebanon, Missouri and departed this life on December 27, 2021 at her home near Windyville, Missouri. At the time of her passing she was 60 years, five months, and 11 days of age. Jackie was raised and attended school in Lebanon, MO. She graduated in 1979 and went to work for Superior Gear which later became Detroit Tool. She was united in marriage to Robert Poole on October 23, 1981, and to this union one child was born, Ranae Poole. She retired from Detroit Tool in 1989 to help Robert work on the family farm. She enjoyed watching Ranae show cattle and pigs, spent many hours riding her horses, watching Ranae and Robert team sort, roping in her earlier years, coon hunting with Robert, and watching pull draft horses. Jackie also enjoyed shopping and was an avid jewelry collector. She was baptized at the Windyville bridge on the Niangua River and attended the First Freewill Baptist Church in Buffalo. Jackie was preceded in death by her parents; her grandparents; and one sister, Lisa Dampier. She is survived by her husband Robert Poole of the home; her daughter, Ranae Poole; sister-in-law, Mary & husband O. G. Hendricks; her nephew, Kyle & wife Stephanie and their children; her niece, Kristan Parman and her children; and her special neighbor kids, Hayden Warner, Christian Warner, Braxton Warner, Avery Dugan, and Brinlee Alseth. She also leaves other family members and many friends who will all truly miss her. Funeral services will be conducted at 2:00 p.m. on Wednesday, December 29, 2021 in the Cantlon-Otterness & Viets Funeral Home with Pastor Brad Duff officiating. Escorts will be Billy Dugan, Christian Warner, Rob Doehring, Kyle Hendrix, Daniel Gray, and Wade Osborn. Honorary escorts will be Butch Keith, Bill Burtin, Steve Davis, Tommy Nichols, Terry Meador, O. G. Hendricks, and Curt Rankin. Interment will be in the Memorial Gardens of Memory Cemetery under the care and direction of the Cantlon-Otterness & Viets Funeral Home of Buffalo. Visitation will be from 1:00-2:00 p.m. Wednesday at the Funeral Home. In lieu of flowers, the family requests donations be made to the American Cancer Society or the St. Jude’s Children’s Hospital. To send flowers or a memorial gift to the family of Jacqueline "Jackie" Charlene Poole please visit our Sympathy Store.

Jacqueline &#8220;Jackie&#8221; Charlene Poole, daughter of the late L. D. and Charlotte (Everetts) Dampier was born on July 15, 1961 in Lebanon, Missouri and departed this life on December 27, 2021 at her home near Windyville, Missouri. At... View Obituary & Service Information

The family of Jacqueline "Jackie" Poole (Buffalo) created this Life Tributes page to make it easy to share your memories.