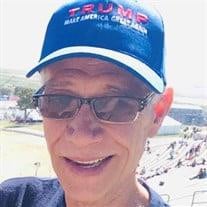 James Richard Catone, son of James and Eleanor (Phillips) Catone, was born in Union City, New Jersey on June 7, 1953, and departed this life on Friday, February 25, 2022, at Mercy Hospital in Springfield, Missouri. He was at the time of his passing 68 years, eight months, and 18 days of age. James was raised and spent most of his early life in New Jersey. He graduated from Brick Memorial High School where he played football. Sometime after graduation he was set-up on a blind date which turned into a beautiful marriage. On January 11, 1978, in Salisbury, Maryland he married his wife, Carol (Beszley) Catone, and they lived a wonderful 44 years together. He was a commercial fisherman in the bays of New Jersey; but, in 1998 James and the entire family would move across the country to California to seek different opportunities in the fishing industry. After some time in California, they moved to Missouri to be closer to family. While living in Missouri he fell in love with the beauty of the Ozarks. James was a true fisherman and outdoorsman. He loved being outside. The only thing he enjoyed more was cooking and BBQing for his family. He was a tough man who was a true Northeasterner; but he loved his family fiercely and was dedicated to them. James was preceded in death by his parents, James and Eleanor Catone; and a sister, Dorothy Woolley. He is survived by his wife, Carol Catone; three daughters, Antoinette Catone of Urbana, Missouri, Melissa Wallick, of White Bluff, Tennessee, Kimberly Rea of Ocean County New Jersey; seven grandchildren; and one greatgrandchild. Graveside services for James will be held at 2:00 P.M. on Friday, March 4, 2022 at Hopewell Cemetery in Goodson, Missouri. Services will be under the care and direction of the Cantlon-Otterness & Viets Funeral Home in Buffalo, Missouri. To send flowers or a memorial gift to the family of James Richard Catone please visit our Sympathy Store.

James Richard Catone, son of James and Eleanor (Phillips) Catone, was born in Union City, New Jersey on June 7, 1953, and departed this life on Friday, February 25, 2022, at Mercy Hospital in Springfield, Missouri. He was at the time of his... View Obituary & Service Information

The family of James Richard Catone (Buffalo) created this Life Tributes page to make it easy to share your memories.