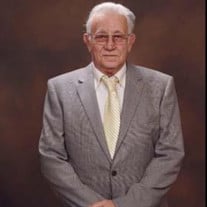 James David Larimer, son of James Junior and Zelma (Thomas) Larimer, was born on November 18, 1946, in Competition, Missouri, and departed this life on the morning of Monday, May 2, 2022, at Mercy Hospital in Springfield, Missouri. At the time of his passing, he was 75 years, five months, and 14 days of age. David married Joyce (Palmer) Larimer on August 18, 1963, at Mt. Pleasant Southern Baptist Church. They shared 58 years together. To this union there were three children born: Rebecca, Jeff, and Julie. David and Joyce were dairy farmers for several years before owning the local Ford Tractor Dealership. David also worked with other local trucking companies as a diesel mechanic. David enjoyed restoring 8N’s and all blue Ford tractors, shooting sports, gigging fish on the Niangua River, and flying airplanes. David obtained his private pilot’s license in the early 1980’s and owned his own plane. He also spent time at the Buffalo Airport repairing and restoring airplanes. David was saved and called to preach early in his life. He was a fervent student of scripture. His favorite scripture was John 1:12, “But as many as received him, to them gave he the power to become the sons of God, even to them that believe on his name.” One of David’s favorite songs later in life was 'Trust and Obey,' “Trust and obey for there’s no other way to be happy in Jesus, but to trust and obey.” David was licensed to preach by Mt. Pleasant Southern Baptist Church on September 21, 1975, and ordained by Cherry Grove Baptist Church on January 5, 1976. David went on to pastor Cherry Grove Baptist Church from 1976-1979, Mt. Zion Baptist Church from 1979-1984, Mt. Pleasant Southern Baptist Church 1984-1986, New Life Baptist Church 2003-2011, and Mt. Pleasant Southern Baptist Church 2012- present. David was preceded in death by his father, James Junior Larimer and sister, Mary Sons. David is survived by his wife, Joyce (Palmer) Larimer of Buffalo, Missouri; his mother, Zelma (Thomas) Larimer of Buffalo, Missouri; three children, daughter, Rebecca (Larimer) and spouse Scott Turner of Elkland, Missouri; son, Jeff and spouse Laryssa (Hill) Larimer of Strafford, Missouri; and daughter, Julie and spouse Heather (Gastler) Larimer of Buffalo, Missouri; four granddaughters; Jennifer (Turner) and spouse Andy McCorkill of Elkland, Missouri, Kelsey (Turner) and spouse Lance Doty of Elkland, Missouri, Kaylee Larimer of Springfield, Missouri, and Madison Turner of Elkland, Missouri; great-grandchildren, Eloise, Emmy, and soon-to-be-born Lee Paul Doty; Molly and Marylee McCorkill; sister, Carolyn (Larimer) and spouse Dale Harrison; brother-in-law, Darrell Sons; and other extended family. Funeral Services for David will be held Friday, May 6, 2022, at 11:00 A.M. in the Mount Pleasant Southern Baptist Church and Brother Rick Waters will officiate. Escorts will be Andy McCorkill, Lance Doty, Clayton Tunnell, Tim Gray, Sham Duskin, and Ron Wilson. Honorary Escorts will be Gerry Palmer, Max Palmer, Dennis Palmer, and Darrell Sons. Interment will be at the Mount Pleasant Cemetery in Elkland, Missouri. Visitation will be Thursday, May 5, 2022, from 6:00 P.M. - 8:00 P.M at the Cantlon-Otterness & Viets Funeral Home in Buffalo, Missouri. In lieu of flowers, memorial contributions can be made to either the Mount Pleasant Cemetery Fund or the Mount Pleasant Southern Baptist Building Fund. Checks can be made to the church and contributions can be given through the funeral home. To send flowers or a memorial gift to the family of James "David" Larimer please visit our Sympathy Store. .

James David Larimer, son of James Junior and Zelma (Thomas) Larimer, was born on November 18, 1946, in Competition, Missouri, and departed this life on the morning of Monday, May 2, 2022, at Mercy Hospital in Springfield, Missouri. At the time... View Obituary & Service Information

The family of James "David" Larimer (Buffalo) created this Life Tributes page to make it easy to share your memories.