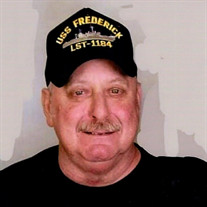 James "Jim" Adrian Sherrer, son of Adrian and Doris Nutter Sherrer, was born February 7,1957in Sleeper, Missouri. He departed this life Sunday, January 2, 2022 at Lake Regional Hospital in Osage Beach, Missouri. At the time of his passing he was sixty-four years, ten months and twenty-six days. On August 25, 1990, he was united in marriage to Maxine Elaine Ward. They made their home in Lebanon and together they raised three children, two sons and a daughter. Jim was preceded in death by his parents, two grandchildren, Jailei Luke and Memphis Sherrer; a brother, Smoky; and a sister, Connie. He is survived by his wife, Maxine, of the home; his children, Justin Ward, April Luke and James Sherrer, all of Lebanon; eight grandchildren, Hope Tuebner, Justin Ward, Alecia Parrish, Chloe Luke, Bella Luke, Maylee Luke, Dallas Sherrer and Natalie Sherrer; his siblings, Dianna Atwell of Eldon, Missouri, Sue Ellen Strait of the State of Nebraska and Daniel Sherrer of Dixon, Missouri. Jim was born and raised in Laclede County and enjoyed playing basketball at Stoutland High School. Following graduation, he enlisted in the United States Navy where he proudly served 20 years. He was a boiler tech for the Navy. After leaving the service, he returned to Lebanon and became a brick layer. Jim really enjoyed being with his grandchildren and loved them so very much. In his free time, you could find him playing music, as he played the guitar and the violin. He also liked to fish, especially noodling! When it came time for a little alone time, you could find him mowing the yard. He liked to do this and could get some of his best thinking done while mowing! He loved his family dearly and they will certainly cherish the wonderful memories he created for them during his lifetime. Funeral services with full military honors for Mr. Sherrer will be Saturday, Jan. 8, 2022 at 2 p.m. at Holman-Howe Funeral Home. Visitation will be Friday evening, Jan. 7 from 5 - 7 p.m. at the funeral home. Burial will be in Barnett Cemetery in Sleeper, Missouri.

James "Jim" Adrian Sherrer, son of Adrian and Doris Nutter Sherrer, was born February 7,1957in Sleeper, Missouri. He departed this life Sunday, January 2, 2022 at Lake Regional Hospital in Osage Beach, Missouri. At the time of his passing he... View Obituary & Service Information

The family of James A. Sherrer (Lebanon) created this Life Tributes page to make it easy to share your memories.