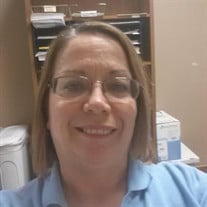 Janice Diane Gibbs, daughter of Charles and Janice Haynes Holt, was born September 13, 1958, in Princeton, Missouri. She departed this life Friday, August 27, 2021, in Mercy South Hospital, in St. Louis, Missouri, at the age of sixty-two years, eleven months, and fourteen days. On December 20, 1975, she was united in marriage to William Lee Gibbs, and to this union two sons were born. She was preceded in death by her parents; and her husband, William, on August 4, 2021. Diane is survived by two sons, Jared Gibbs, and his wife, Christy, and Adam Gibbs, all of Lebanon, Missouri; three grandchildren, Andie, Alex and Shelby; a sister, Cathy Light, of Lebanon, Missouri; two brothers, David Holt and his wife, Lynne, of Lebanon, Missouri and Danny Holt, and his wife Trina, of Lebanon, Missouri; several nieces and nephews; as well as a host of other relatives and friends. She lived most of her life in the Lebanon, Missouri area and graduated from Lebanon High School. After she and William were married, they made their home near Lebanon, and lovingly raised their sons. Diane was a devoted homemaker to her husband and family, and also worked for the H. D. Lee Company and Lowe Boats for several years. Later, she worked for Mercy Hospital until retiring. Janice had attended the First Freewill Baptist Church in Lebanon for the past several years. She enjoyed doing CrossFit and was a wonderful cook. She also liked gardening, caring for her home and having and going to yard sales. She had a delightful sense of humor and loved to laugh. Her family was very dear to her and she especially enjoyed having time with her grandchildren. Diane was a loving mother, grandmother, aunt, and was a caring friend. We celebrate her life and know that her family and friends will cherish the wonderful memories she created for them during her lifetime.

The family of Janice "Diane" Gibbs (Lebanon) created this Life Tributes page to make it easy to share your memories.